Member Monday: Allied Fire & Safety Equipment “One Call Does It All!” 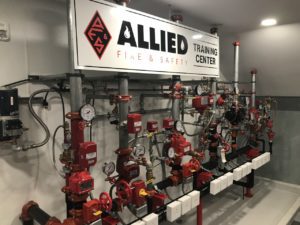 NFSA staff was able to visit with Sprinkler Install Managers Scott Vigar and Marios Goumalatsos of Allied Fire & Safety for a tour of the company’s headquarters as well as an interview to learn more about the company’s history, services, and role within the NFSA.

Robert Newell founded Allied Fire & Safety in 1970. He ran the company out of a converted bread truck and would eventually open an office in Red Bank, New Jersey. His brother Ronald would eventually join the company doing sales during the day and services and installations at night, often working on the jobs that he sold. The company started small with only three employees but has since grown to include over 65.

Allied Fire & Safety started by selling fire department supplies and would eventually add installing and servicing portable fire extinguishers and fire suppression systems to its services as well as hood cleaning. Growing pains caused the company to move from Red Bank to Middletown before finally settling in Neptune, New Jersey where it has been ever since.

Setting an Example Throughout the Garden State

Allied Fire & Safety has built a strong reputation as a contractor that can handle any job, as such the company has offered its fire protection services in almost every type of building, from homes to high rises, to historic buildings and military aircraft hangars. Notable projects include the LG North American Headquarters in Englewood Cliffs,  Hahne & Co. building in Newark, the M Station in Morristown, the Meridian Teterboro Hangar, as well as over 20 Target Stores throughout the NJ & PA and a retrofit of the century-old Union County Courthouse. Additionally, in the wake of Hurricane Sandy, Allied Fire & Safety went to work installing sprinklers in several renovated homes along the Jersey shore. 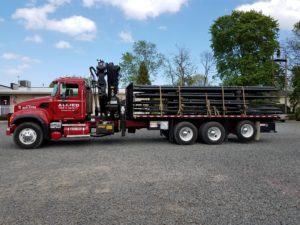 To say Allied Fire & Safety has come a long way from the back of a bread truck may be an understatement. The company’s headquarters includes a main office, a fabrication shop, and—most recently—a state-of-the-art fire sprinkler training center and a gym.

Allied Fire & Safety boasts an impressive fleet of vehicles, including a job-site ATV utility vehicle and even a 80’ Knuckleboom and Rollback truck for offloading materials and lifts on jobsites from their fabrication shop.

Giving Back to the Community 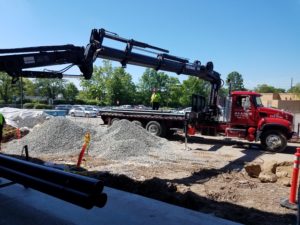 Allied Fire & Safety has worked the past 50 years to make New Jersey a safer place to live, but that has not been enough for the company. In addition to protecting New Jerseyans from the threat of fire, Allied Fire & Safety has also donated to several first responder organizations throughout the state, including Middletown PD and Neptune PD and Navesink FD and the Monmouth County Prosecutor.

Allied Fire & Safety has been an NFSA member for several years now. Scott Vigar says that the biggest benefits for the company have been industry news, chapter meetings, and the comradery between friendly competitors that comes with attending them. The company has been busier than ever and looks forward to more opportunities to protect the Garden State and give back.