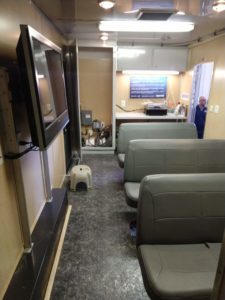 On May 11, an august group of individuals from the Minnesota Chapter met with Apple Valley (MN) Fire Marshal Brian Kilmartin to discuss renovations to the Dakota County Fire Chiefs Association Fire Sprinkler Demonstration Trailer. The trailer, originally purchased through a grant nearly 20 years ago, is still used for a number of events around the state each year. Marshal Kilmartin was seeking ideas for upgrading and modernizing the unit to maximize its potential as a fire sprinkler education platform.

The “Apple Valley Trailer” contains a small “burn room” where a single sprinkler extinguishes a fire started in a wastebasket with extension to a curtain. The trailer also contains a seating area adjacent to the burn room where audience members sit close to the action but are shielded from direct heat and water spray by a window. Audience members can smell the smoke, feel a bit of heat, and witness both the fast activation of a smoke alarm, and the rapid and complete extinguishment by the fire sprinkler. 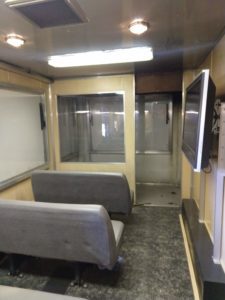 There are several significant advantages to using this type of trailer in lieu of a multi-cell side-by-side demonstration trailer. First, multiple demonstrations can be performed in a single public education event. When NFSA’s Minnesota Chapter members use this trailer at the Governor’s Fire Prevention Day at the State Fair, they can run more than a dozen demonstrations in a single day. Resetting the trailer for subsequent burns takes minutes versus the hours or days to refurbish a side-by-side trailer. Cost is another factor: cotton curtains and wastebasket contents are far less expensive than the set of living room furniture typically used in the Chapter’s side-by-side live-fire demonstrations. The third significant advantage is that this trailer can be used in locations where excessive smoke production from a side-by-side burn would be prohibited. Finally, audience members actually sit inside this trailer and can see how fast the sprinklers operate from several feet away, and how little heat and smoke is produced before sprinkler activation. 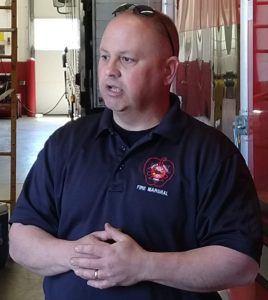 The expert group that conducted the May 11 discussion provided Marshal Kilmartin with a number of suggestions, and pledged labor and equipment donations to help with the renovations once final design decisions are made. Among the improvements recommended were: removing an old tank and pump system that was not performing adequately; installing a residential system to provide audience members with a firsthand look at what such a system might look like in their homes; installation of a second sprinkler head directly above the audience and adjacent to the burn room to demonstrate that only the sprinkler closest to the fire activates; and running the sprinkler piping through the audience seating area inside a soffit to demonstrate the aesthetics possible with hidden piping and concealed sprinklers in a residential setting. Modernization and enhancements to the installed AV system were also discussed – ones that would allow expanded fire safety public education programming and larger audiences viewing the demonstration from outside the trailer.

The group was incredibly grateful to hear that Fire Marshal Kilmartin is dedicated to continuing the sprinkler education purpose of the trailer. We look forward to the final recommendations and helping make the improvements in time to showcase them publicly for the first time at the 2021 Governor’s Fire Prevention Day at the State Fair on August 27.