I Don’t Get It

At 1417 Hours on July 24th, 2017, a fire began on the 26th floor of the Marco Polo condominiums in Honolulu, Hawaii. Before it was over, 4 people were killed, and 13 others injured. The fire damaged or destroyed over 200 units in the 568-unit, 36-story building. The structure was built in 1971, prior to the requirement for sprinklers. Reportedly, the fire caused over $100,000,000 in damages1. The fire was the most expensive in hawaii history and over two dozen lawsuits were filed against the condo association and management company. the lawsuits were settled in late 2019, for an undisclosed sum2.

Many communities have explored the concept of retrofit and some have even passed laws requiring it. Others have passed laws, but enacted provisions for the occupants to “opt-out” by putting the subject to a vote of the tenants.

This was the 3rd fire in the last eight years; a fire in 2013 caused $1.1 million in damages. Following that fire, where there were no reported injuries, the management company sought prices to fully retrofit the building; it came in at $4.5 million, or approximately $8,000 per unit. The occupants of the building held a vote and decided against this investment in fire safety, in their fire safety

The investment of just 4.5% of the cost of the 2017 fire would have precluded that $100,000,000 fire. It should be noted that this $100 million dollar figure concerns direct fire damage; it does not include the financial settlement as a result of the lawsuit, so that percentage is probably significantly less.

All of that said, I don’t understand the concept of a lawsuit by those who either voted against the installation of sprinklers, or knew sprinklers were not present and yet chose to stay in a building without them.

“I never thought it could happen to me;” how often is that stated after a fire has occurred? The National Safety Council estimates that one’s chances of dying in a fire is about 1 in 1,474, slightly less than one’s chances of drowning, but it can happen.3

If you choose to take the risk, should you be able to sue others because you took the chance and lost? To put this another way, if you’re playing poker at the tables and you bet $10,000 because you’re holding four of a kind (chances of winning – 1 in 4,165), should you be able to sue the casino for lost money if you lose? Of course not, you chose to wager money knowing there is a chance you would lose.

Well, if you choose to wager your life in a building in which you voted against the installation of sprinklers, or were aware that the building did not have sprinklers, you should have to deal with the consequences; not blame someone else for your bad decision.

I realize this is harsh and people don’t think in such a manner. But I wonder, would it be legal to have those who vote against the installation of sprinklers sign a waiver absolving others of the responsibility in the event a fire occurs? Or, sign a similar waiver as part of your lease when you choose to move into a building without sprinklers. 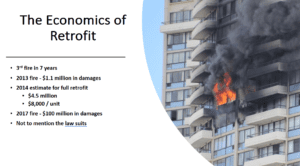