The Minnesota Chapter of the National Fire Sprinkler Association is dedicated to advancing the fire sprinkler concept throughout the state. The chapter is headed by fire protection veteran and former Minnesota state fire marshal Tom Brace. Tom works closely alongside fire officials, legislators, and the public to promote the widespread acceptance of fire sprinklers. For more information on chapter events, training, and membership benefits, contact Tom Brace at brace@nfsa.org, 651-603-8827 (office) or 651-644-7800 (cell).

The list below show the insurance company discounts for homes with fire sprinkler systems and any special requirements.

On February 18th, Minnesota State Coordinator Tom Brace and Regional Manager Tim Butler delivered a $2,500 check to the City of Saint Louis Park Fire Chief, Steve Koering. The check was a donation from the NFSA Minnesota Chapter members for the purpose of retrofitting a city-owned single-family dwelling with a residential sprinkler system.

NFSA At The Construction Technology Trade Fair In Chaska, MN

Minnesota Chapter Side By Side Trailer Gets An Upgrade 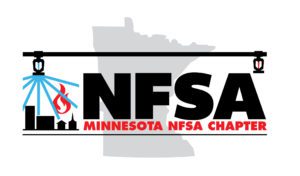 “To protect lives and property from fire through the widespread acceptance of the fire sprinkler concept.”