NFSA staff had the opportunity to sit down with Mike Sloan, Dennis Pardy, and Ann Ryan of the Shawcor Composite Systems sales and marketing departments. The NFSA and Xerxes by Shawcor team discussed the history of Xerxes tanks, services, and role within the fire protection industry as a water storage tank manufacturer.

Safety Advocates Since the Start 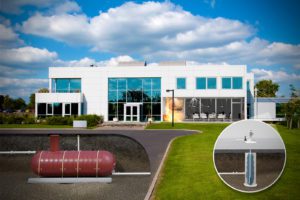 While Xerxes did not have their start in the fire protection industry, as a manufacturer of fiberglass fuel tanks for more than 40 years they have always been committed to safety. As a manufacturer of underground fuel storage tanks, Xerxes had to ensure that leaks would not be an issue. Their fiberglass fuel tanks are typically found underneath fuel stations and convenience stores with fuel, and are designed to hold tens of thousands of gallons of fuel products.

Xerxes went on to expand their product line to include watertight underground storage tanks for numerous water and wastewater applications, including fire protection systems. If a water supply or flow is unavailable or unreliable, Xerxes’ tanks will provide the system with an ample supply of water. Shawcor manufactures one-piece, no-assembly-required tanks that can hold tens of thousands of gallons of water. They come in diameters from 4 feet to 12 feet. For unlimited capacities, multiple tanks can be installed and manifolded together. Dennis even shared that he has seen tank systems that held up to 300,000 gallons combined!

The company holds itself to a high standard of quality and believes that zero leaks is the only acceptable outcome for its watertight tanks. As far as the competition , concrete it’s not a matter of “if” their systems leak but it a matter of when. Beyond storage for fire protection water supplies, the tanks can also be configured and used for collection of water after a sprinkler event. 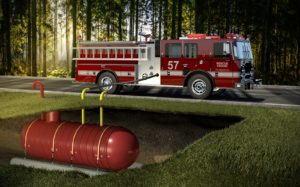 protection and potable water. This makes their systems even more critical, especially since they are used for both life safety and quality of life. These dual-application systems are common in isolated areas such as resorts, restaurants and, residential communities. Xerxes’ tanks are also designed to be up to H-25/HS-25 load rated so they can go under parking lots, and are placed deep enough that they aren’t affected by frost. The tanks are easy to ship and install.

Xerxes has been an NFSA Supplier and Manufacturer (SAM) Member since 2005. Xerxes has worked closely with the NFSA on NFPA 22, the Standard for Water Tanks for Private Fire Protection. Xerxes has had a presence at NFSA’s expos and chapter meetings, and shared that their NFSA membership has played an important role in generating leads.

For more information on Xerxes by Shawcor’s role as an innovator in fiberglass tank manufacturing, visit their site here.