On September 2nd of 2019, the dive boat Conception suffered a catastrophic fire during which 34 people died. It had been designed and built in 1981 and the builder stated, “I designed the entire layout of the vessel,” Hauser said. “I drew it out a quarter inch to the foot and then gave it to a marine architect. They put together the final Coast Guard papers, if you will. Glenn has all the plans and they are all stamped ‘approved.’ … Everything you do has to be approved by the Coast Guard.” In addition, it successfully passed its Coast Guard inspection within the year. Apparently, the sleeping quarters had two exits, one of which was a “hatch” to which you gained access by climbing-up a bunk. One gentleman said the boat was kept in “immaculate” condition and “defended its design characteristics as ‘absolutely’ safe.” How can a space be considered “absolutely safe”1 when 34 people died there?

As soon as I read the story about the 2nd exit from the sleeping quarters being a hatch, I thought of a recent visit to a casino, based on a river boat, the name of which I will not mention here. I had gone aboard to take a look and wandered up a set of stairs to the upper deck. Out of habit, I immediately started to look for another exit in the event an emergency might arise, and my original access was blocked.

Here is what I found, but note, this is an A-2 — Assembly Occupancy, used as a casino, housed on a boat that is permanently tied to a quay. It is not subject to the local building code, as it floats on a river. It is governed by the regulations promulgated by the federal government, enforced by the Coast Guard.

As best I could tell, this was to be my 2nd means of egress from this upper deck. I could be wrong, but I could find no other secondary exit; I didn’t stay on that upper deck long. 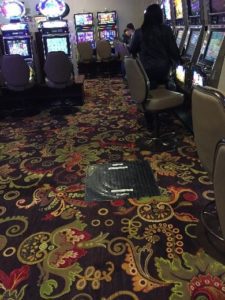 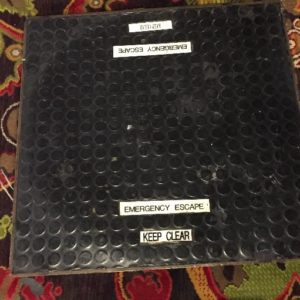 This takes me back to the fire aboard the Conception; in the previously referenced article, an interesting observation was made … “John McDevitt, a former assistant fire chief from Pennsylvania and the Chairman of NFPA’s committee on commercial and pleasure boat fire protection, called the Conception a ‘compliant fire trap.”2

A code compliant fire trap; as we lose over 2,500 lives to house fires every year, could unsprinklered homes be considered such; just look at the 10-year trend. 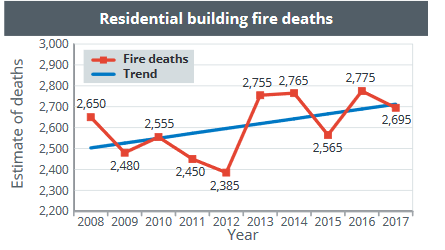