Created in 2009, the Leadership in Public Safety Award has been given annually to acknowledge individuals who have worked toward the protection of the public from the threat of fire through support of the fire sprinkler concept. The full list of inductees since its inception in 2009 is as follows: 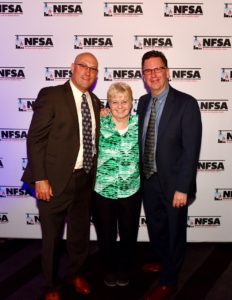 Vina Drennan – “While fighting an apartment building fire in Lower Manhattan, New York City, on March 28, 1994, my husband Captain John Drennan and two other firefighters were searching for residents on the second floor while it appeared that the fire remained on the first floor. Suddenly the fire broke through a door on the first floor and climbed the stairway to the second floor, trapping John and the other firefighters. The fire turned to flashover and they were engulfed in flames. One of the firefighters died on the scene while the other succumbed to injuries the following day. John experienced third- and fourth-degree burns to 65 percent of his body. He fought hard to stay alive at the hospital burn unit, however, after 40 days of struggling to survive skin grafts, organ failures, and other procedures his body could fight no more. I lost my husband at the young age of 49. Had there been fire sprinklers in the building and properly insulated bunker gear for the firefighters, John would still be here with me today. While fire sprinklers protect occupants of buildings, they also protect the firefighters who risk their lives when responding to fires.”

Tonya Hoover – former California State Fire Marshal. Hoover has dedicated her career to the citizens and fire service of California and around the country. She led California to be the first state in the U.S. to adopt the International Residential Code with the inclusion of residential fire sprinklers. Chief Hoover also led through a second adoption process to maintain the requirements for improved fire and life safety. She is a great friend to our Association and has exemplified service to the citizens, firefighters and fire sprinkler industry. She currently lives in Maryland in a home with fire sprinklers.

William Barnard – Bill has been actively involved in Maryland’s fire and rescue service for more than 40 years. In July of 2001, he was appointed as the Maryland State Fire Marshal, serving two six year terms before retiring in July of 2013.

Bill began his career in public safety in 1968 as a volunteer firefighter with the Hyattsville Volunteer Fire Department in Prince George’s County, Maryland and served in the Military Police in the District of Columbia Army National Guard. In 1971, he was appointed as a career firefighter with the Prince George’s County Fire Department, where he rose through the ranks retiring as the Deputy Fire Chief for Special Operations.

Throughout his career, Bill has worked tirelessly to improve fire safety. While serving as State Fire Marshal, the number of statewide fire deaths steadily declined from 94 deaths in 2001 to a record low of 53 deaths in 2012. For many years, he has devoted much time and effort toward the promotion of residential sprinkler protection. While serving as the Prince George’s County Fire Marshal, he led the successful implementation of comprehensive residential fire sprinkler legislation, which now protect tens of thousands of Prince George’s County families.

Steve Hart – Steve began his career with the City of Monterey Public Works Department and County of Monterey Building Department before moving on to the cities of Marina, Monterey and Foster City Fire Departments where he served as Fire Marshal. He later served as the first director of the Fire Sprinkler Advisory Board of Southern California before moving to the State of California Office of the State Fire Marshal where he served with distinction as the Deputy Director (Deputy Chief) of Codes and Regulations.

Cindy Stellhorn – Though her business career started by taking a position with an insurance company as an underwriter, Cindy will tell you that every walk of her life prepared her for a career in risk management. Being raised on a large turkey farm in Indiana where everyone in the family was expected to contribute to the success of the business, she learned early on the meaning of teamwork and the individual responsibilities needed to make the team successful. She has been active in numerous non-profit organizations throughout her life, taking on leadership positions. Her background in the Arts and Sciences with a teaching degree from Indiana University has given her a unique perspective that comes only from an understanding of both the creative and technical. Cindy especially enjoys working with fraternities and sororities in developing insurance programs best suited for each individual chapter as they develop and implement their respective life safety programs. As a result, she takes great pleasure in working with and empowering collegiate women to help them succeed while developing their own leadership skills.

Ron Coleman – Former California State Fire Marshal serving from 1992 – 1999. He is also past President of the International Association of Fire Chiefs and the League of California Cities Fire Chiefs Department. Earlier in his career as a servant to public safety, he was Fire Chief in the City of Fullerton Fire Department and before that, Fire Chief for the City of San Clemente Fire Department. In addition to being a highly sought after keynote speaker, Ronny is a nationally recognized author of books and articles spanning a broad range of public fire safety topics including residential fire sprinklers. He is currently President of the Fire and Emergency Television Network and the National Fire Heritage Center located in Emmitsburg, Maryland. In recognition of a career successfully championing fire sprinklers as the solution to America’s fire problem, he was appointed President of the IRC Fire Sprinkler Coalition, an interdisciplinary fire safety group, whose advocacy of residential fire sprinklers played a pivotal role in the adoption of fire sprinkler requirements in the body of the International Residential Code.

Don Pamplin – Don is a former Fire Chief of the Vancouver Fire and Rescue Department in Vancouver, British Columbia, Canada. He served in that department for 38 years with the last 14 of those years working at a senior chief level involving all aspects of the delivery of comprehensive fire protection to the third largest city in Canada. He is also the former President of the Canadian Association of Fire Chiefs and former President of the greater Vancouver Fire Chiefs Association in British Columbia, serving a population base of over two million residents. Don also served several years as Vice Chair of the Board of Governors for the Justice Institute of British Columbia, which is a multi-disciplined training center for all fire, police, paramedics and emergency management personnel in that province. In 1990, as Fire Chief, he was instrumental in establishing a comprehensive sprinkler ordinance that required fire sprinklers in all newly constructed residential occupancies, including single-family homes. At that time up to the present day, the ordinance is recognized as the most significant and comprehensive fire protection ordinance in all of North America. After retiring from the Vancouver Department, he served as the Western Regional Manager for the Canadian Automatic Sprinkler Association. Since 2000 he has held the position of Pacific Northwest Regional Manager for the National Fire Sprinkler Association.

John Reich – South Carolina Fire Marshal who was the driving force for the retrofit law enacted in South Carolina following the deaths of 9 firefighters in the furniture warehouse fire.

Dave Hilton – Former Fire chief of Cobb County, Georgia who was instrumental in the promotion of residential sprinklers for multi-family housing, helping to create the need for NFPA 13R.

Tony Apfelbeck – Fire Marshal and Building Official for the City of Altamonte Springs, Florida since 2000. As a leading fire sprinkler advocate, the Florida Fire Sprinkler Association – a Chapter of NFSA recently named him their “Fire Sprinkler Champion of the Year.”