Jeff should know this risk better that anyone. A fire protection engineer and the National Fire Sprinkler Association’s “battery guy” (as his coworkers have called him), Jeff follows a number of high profile fires that involved lithium-ion batteries.

But what exactly are lithium-ion batteries, and is the risk they pose overstated, or should everyone be wary? Fire protection professionals may also wonder what they need to keep in mind when it comes to protecting occupancies that store these batteries. The National Fire Sprinkler Association sought out to answer the following questions:

Lithium-ion batteries are nothing new. Having existed for decades, recent developments in production have made them much more affordable for companies to use in their products.

One benefit lithium-ion batteries have over traditional batteries is their recharging properties, making them ideal for cell phones, power tools, electric lawn mowers, and electric cars – to name just a few of their more popular applications.

How do Lithium-Ion Batteries Work? 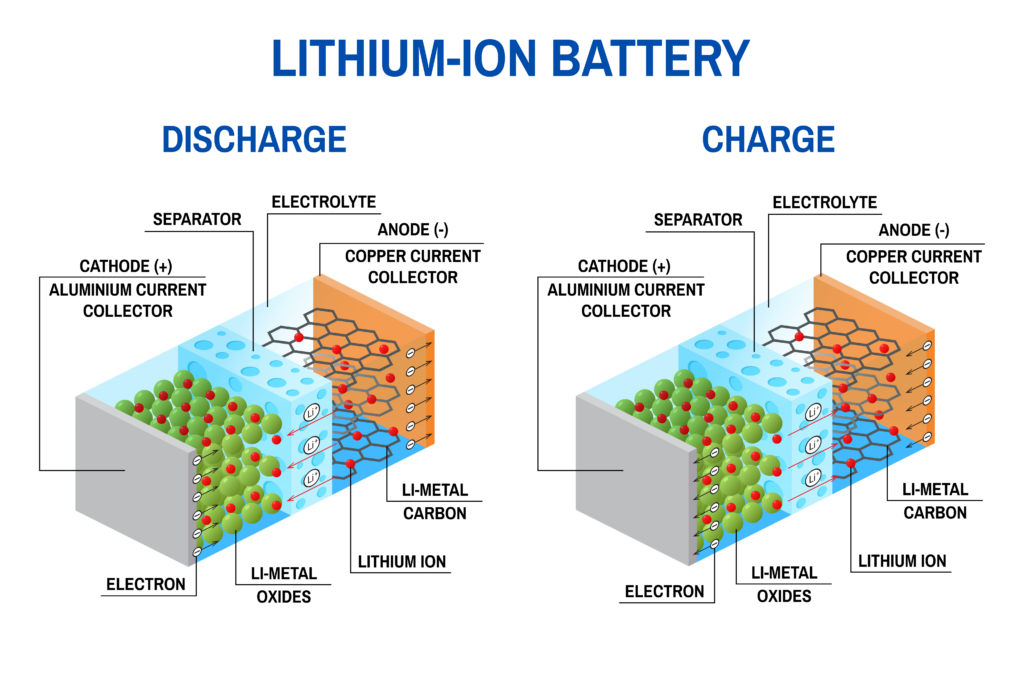 In many applications, the battery’s cathode is comprised of lithium cobalt oxide and the anode is made of graphite.

Take for instance a cell phone. When a cell phone is plugged in to charge, electrons enter the anode and cause lithium-ions to migrate from the cathode to the anode, nestling between the graphite layers.

When the phone is unplugged, the process works in reverse. Electrons will move through a circuit, powering the phone and then moving to the cathode. As the process continues, lithium-ions –drawn by the electrons at the cathode—move to the other end of the battery. Once all ions reach the cathode the battery is out of power.

The above process can be repeated over and over and again, allowing the battery to charge and power the device way longer than a traditional alkaline battery would.

With this recharging capability, it is easy to see why lithium-ion batteries have taken over, but it has not been without some serious growing pains.

What are the Risks of Lithium-Ion Batteries?

Lithium-ion batteries seem like a clear win for electronics. Gone are the days of having to change batteries or bring a spare set on the road for a device, but there have been some significant, high-profile drawbacks that have drawn national attention. 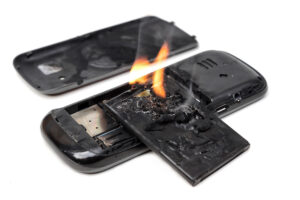 Headlines abound surrounding the fire risk of lithium-ion batteries. The first notable instance were Samsung phones that would overheat and burst into flames. One inopportune combustion occurred on a plane midflight, resulting in an emergency runway landing and sending the media into a frenzy.

Samsung phones were merely the starting point. Around the same time and shortly thereafter, headlines surfaced covering fires that started from hoverboards and other electronics.

Electronic vehicle batteries are another concern. Fires in electric vehicles started a media frenzy. The concern of lithium-ion battery fires in cars was so much that it even negatively impacted Tesla’s stock in 2013. Luckily, the company has taken proactive steps to mitigate the risk and their technology has come a long way, but the concern surrounding lithium-ion battery fires remains.

But what exactly is causing these fires, and how should companies and the public react?

What is Thermal Runaway?

What makes lithium-ion battery fires so distinct is thermal runaway. This occurs when heat builds up in the battery faster than it can be dissipated, causing the battery to off gas or even explode.

Thermal runaway occurs when the battery is overcharged or overheated or suffers damage such as a puncture.

As if that wasn’t bad enough, a lithium-ion battery stored near or next to another battery or batteries can set off a chain reaction, making an already tough fire to fight even worse.

What is Peak Shaving?

The bulk of the power grid is still served by coal and other fossil fuels. The electric demand increases and drops throughout the year and to a lesser extent throughout each day. The larger plants using coal or combined cycle natural gas as fuels are generally used for the median demand, and other methods are used to increase the supply during peak times. Historically smaller simple cycle natural gas plants or stored hydroelectric systems have been used to bolter the supply when needed.

Lithium Ion based Energy Storage Systems  (ESS) are also integral renewable energy sources such as wind and solar. Since wind and solar power depends on the environment, ESS systems allows for the supply of electricity to be more consistent.

Are Energy Storage Systems used for Peak Shaving a Hazard?

Surprise, Arizona, a city northwest of Phoenix was site to an infamous fire that involved lithium-ion. In 2019, a hazmat fire team responded to a call at an energy storage system (ESS). The batteries stored in the facility reached thermal runaway temperatures and a clean-agent system had reacted.

When the response team opened the doors to the facility they introduced oxygen into the fire, leading to a deflagration event.

The resulting explosion left four firefighters seriously injured, though luckily this event led to no fatalities but did cause serious injuries.

With lithium-ion battery fires becoming more and more common, what has the fire protection industry done to mitigate this risk? And what does this mean for consumers and business owners who use devices with these batteries?

“Look, I have lithium-ion devices in my own house,” Jeff Dunkel explained, “You just need to be smart about them.”

Lithium-ion batteries are here to stay. The solution is not to throw away anything with a rechargeable battery, but there are steps to take that will minimize the chances of a fire.

What Does NFPA Say About Lithium-Ion Protection?

The above tips have their merits for consumers and small business owners, but what about business owners who store several of these batteries in large quantities and the fire protection contractors that need to protect these facilities?

Jeff Dunkel explained that, unfortunately, there is not much in the standard right now that definitively states what to do when it comes to protecting facilities with lithium-ion batteries. Jeff and the NFSA Codes and Standards team are hard at work on several NFPA technical committees to make sure the standards have language in them that adequately protect against these fires.

While progress is still in development, Jeff still shared some insight into what it takes to fight these fires.

For fire sprinklers and lithium-ion battery fires, the only concern is not necessarily the output of the sprinklers, but rather the duration they provide water.

Fires involving lithium-ion batteries are unique because of the duration they burn, as such they need fire protection that can continuously supply water to keep the fire from spreading.

Jeff explained that a common practice is to contain ESS systems in enclosures similar to shipping containers so they are isolated. In the event of a fire, the fire will not spread and if provided a sprinkler system inside the shipping container can continuously provide water on the fire.

in other cases, it is good practice to keep the batteries isolated from the rest of the material either by providing adequate spatial separation or by a physical fire rated assembly  and with adequate sprinkler coverage to contain any potential fires within that specific area

The industry is not without data, however, and the above suggestions do have their basis in in research. NFPA 855 requires a design density of 03. Gpm/sqft over 2500 sqft for energy storage systems up too 600 kWh where groups of batteries not exceeding 50 kWh is separated by 3 feet.  The NFPA also conducted several controlled burns in 2019 and offered the following protection measure recommendations for two types of lithium-ion batteries (bear in mind these are just recommendations and are not present in any NFPA standard at the time of this article’s publication):

For the tested LFP system:

For the tested LNO/LMO system:

What Role Does the NFSA Play in Controlling Lithium-Ion Battery Fires?

NFSA engineers like Jeff Dunkel are working every day to protect lives and property. The engineering department at NFSA does this by representing the association’s members on several NFPA technical committees where they advocate for fire sprinklers in more settings.

Building upon the belief that a stronger industry leads to a safer world, the NFSA’s team works at the highest levels of fire protection to grow the industry. This in turn leads to more work for NFSA contractor members, and—above all else— a higher rate of protection for citizens and firefighters.

NFSA’s engineers also work with ULFSRI and other groups to conduct research and development for the fire protection industry. These results are then used to promote sprinklers to the public as well as elected officials and governing bodies.

The engineering team at NFSA also provides a codes interpretation service to NFSA members. Contractors or code officials that have a codes question can have NFSA staff not only answer it, but also cite the standard and provide reasoning for their interpretation.

For more information on membership benefits, or to join the National Fire Sprinkler Association, visit our membership page today.

How Does a Lithium-ion Battery Work?

What does Peak shaving mean?