What is Conflagration? Understand This Growing Concern in Fire Protection

What is conflagration and how does it affect fire protection? Conflagration is defined as, a large disastrous and destructive fire that threatens human life, animal life, health, and/or property. We have started to hear words like this, along with new ones like Megafire, a large fire devastating areas of 100,000 or more acres. Only three percent of fires reach the Megafire level, but they are responsible for fifty percent of the total burned areas on the planet. Today, we also talk in terms of Giga fires, these fires are typically classified as fires greater than one million acres. While the terms are often being used to describe wildland fires, this cannot distract from the destructive nature of these large-scale fires.

Learning from the Past: Notable Conflagrations 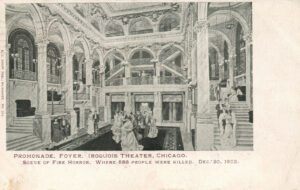 A postcard of the Iroquois Theater.

A conflagration in a building, is simply a structural fire that completely encompasses the building, and we have many examples of tragic structures fires meeting this definition. The 1901 Chicago Iroquois Theater Fire is an example of one such fire that claimed 602 lives. The fire completely engulfed the building structure, but the exterior was left largely intact. It was re-built as the Colonial Theater only to be demolished, to build the current structure, the Oriental Theater, in 1925.

This was the fire we began to control with minimum national building codes and standard requiring different levels of fire protection. The amount of building fires in structures with modern fire protection, both active (automatic fire sprinklers) and passive (fire resistant material) reaching these levels are mostly unheard of in today’s modern construction. These minimum requirements have allowed us to drastically reduce the overall risk of a true conflagration in a structure.

Today’s concern must center around the urban conflagration risk. Urban conflagration is defined as a large disastrous and destructive fire that spreads beyond natural or artificial barriers. We have seen this play out in the wildland fires currently devastating much of the United States. California fires alone have already seen fires surpassing four million acres of lost land, killing thirty one people, and destroying 8,454 structures. 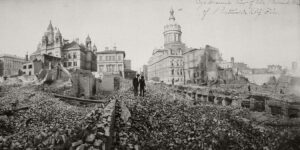 The Great Baltimore Fire of 1904 was an example of a conflagration.

In 1904, Baltimore, Maryland, suffered a catastrophic urban conflagration. It raged for thirty hours, burning 2,500 building structures, leaving 35,000 people unemployed, and an estimated property loss of over four billion dollars in today’s figures. While most agree that the fire did not directly have any reported deaths, five lives were indirectly attributed to the fire. This is the fire that opened the door for the discussion of modern-day national standardization of firefighting equipment in the United States. The National Fire Protection Association (NFPA) adopted a national standard for fire hydrants and hose connections as a direct result of the fire. The City of Baltimore was able to rebuild in an unprecedented short time frame of two years, adopting building codes that stressed fire protection standards. 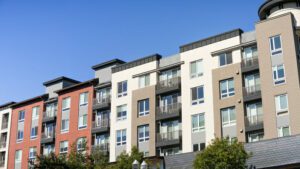 Mixed use occupancies are a great solution for housing – if they are protected.

Simply protecting the inside of a structure, without proper fire protection and/or separation in adjoining structures leads to a potential risk of a large disastrous and destructive fire that spreads beyond natural or artificial barriers, that will ultimately threaten human life, animal life, health, and/or property.

The team at the NFSA advocates for common sense codes and standards solutions. Our Codes, Standards and Public Fire Protection team sits on several National Fire Protection Association (NFPA) Technical Committees, and advocate for codes that save lives and protect property.

To become an NFSA members, visit our membership page today.