The National Fire Sprinkler Association team was proud to work alongside members to conduct a golf outing for fire sprinkler contractors in Pittsburgh. It had been a while since the association had been active in the Pittsburgh area, and staff of the NFSA membership, labor, Industry Promotion, and leadership teams all took part in this event that brought in over twenty golfers!

President Ray covered the NFSA efforts when it came to high rise retrofit in Minnesota and expressed the hope that the association’s efforts could be replicated in the Pittsburgh area.

Another topic of discussion was the Pittsburgh Industry Promotion fund and brainstorming how it could best be used to promote the fire sprinkler concept to citizens and elected officials. 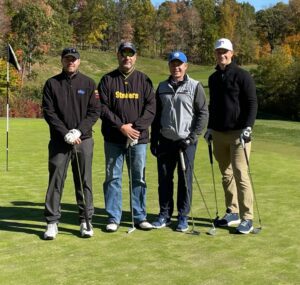 The National Fire Sprinkler Association hosts several events like the Pittsburgh golf outing throughout the country, from training classes for CEUs to fun member meetups and networking events to discuss the state of the industry.

For more information on membership with the NFSA, visit our membership page to learn more about the benefits that come along with membership. To view events in your area, visit our events page.

NFSA has several chapters and areas. To learn about our different chapters throughout the country, visit our regions page.