September 30, 2022 is the sunset date to replace existing antifreeze with a listed solution or replace the antifreeze system with another type of water-based sprinkler system. 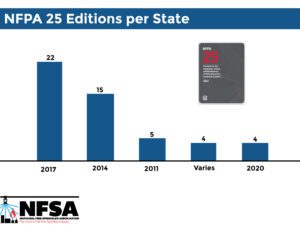 This investigation caused significant changes in the fire sprinkler industry. New antifreeze systems were no longer allowed to be installed after September 12, 2012, unless a listed antifreeze was available. There was an exception for in ESFR systems, where a premixed solution was permitted to be installed in accordance with NFPA 13, The Standard for the Installation of Water-Based Fire Sprinkler Systems,  2016 edition, Section 7.6.2.2.

This also caused many changes in NFPA 25, The Standard for Inspection, Testing, and Maintenance of Water-Based Fire Sprinkler Systems.  Since the 2011 edition of NFPA 25 was ready to be released when the investigation by NFPA was completed, a tentative interim amendment (TIA) was created. A TIA is created when something can cause building or system damage or possible personal injury to amend a specific edition of an NFPA standard. Here is a link to the 2011 edition TIA’s.

The TIA limited the amount of antifreeze mixture in systems as well as led to several changes in the future editions of NFPA 25.

Existing antifreeze systems are required to be tested for concentration levels annually.  The systems must be maintained at the anticipated minimum temperature for a specific region.  A chart can be found in Annex A of NFPA 25 that depicts the lowest one day mean temperatures across the United States.

For years, depending on what region the antifreeze was being installed, it was common practice for contractors to purchase concentrate antifreeze and mix the solution on site to the proper levels before pumping into the sprinkler system.  A premix solution could also be purchased, but the premixed solutions typically only protected to about 0 F and this temperature does not work for all parts of the country.

Included in these changes is a limitation on the percentage of antifreeze allowed in existing systems.  The concentration of antifreeze solution is now limited to 38% by volume for glycerin 30% by volume for propylene glycol.  If the existing solution type could not be properly determined, the solution must be removed and replaced with new premixed solution.  There are also requirements to test the solution at multiple points in the system.  A minimum of two points is required for systems that are 150 gallons or less and one additional point for every additional 100 gallons.  For example, if testing a 300-gallon system, the solution would be required to be tested at a minimum of four points. Two for the first 150 gallons, one for the next 100 gallons, and one for the last 50 gallons. Requirements for testing existing fire sprinkler antifreeze can be found in the following sections for each edition of NFPA 25.

Also note that a new requirement in the 2017 edition of NFPA 25 is an antifreeze sign.  The sign requires name of manufacturer, antifreeze type, brand, the concentration by volume, and the volume of the system. 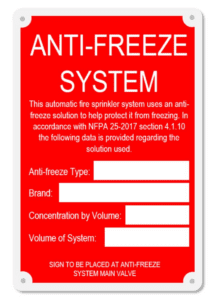 Example of an antifreeze sign for fire protection systems.

The NFPA 25 committee has voted for legacy antifreeze to remain in service for the 2023 edition provided it meets a maximum of 38% by volume for glycerin 30% by volume for glycol currently listed in the standard. If for any reason the antifreeze solution fails, it must be replaced with a listed solution.  Essentially, if the current solution tests within the requirements of the standard, it can remain, but under no circumstances for both existing and new antifreeze systems, could the legacy antifreeze be refilled or introduced to the system.

[UL Certified Antifreeze Solutions for use in Fire Sprinkler Systems]