Do fire sprinklers detect smoke? Do fire sprinklers all go off at once? We searched Google for your top fire sprinkler questions. Many of these questions are common for those who don’t work in the fire protection industry, others are more out of left field. Read on to learn more about these life-saving systems!

No. Your everyday fire sprinkler does not detect smoke. Smoke alarms detect and react to smoke with a visual or auditory signal.

Also, just because you have fire sprinklers in your home doesn’t mean you still shouldn’t replace your smoke detector batteries twice a year! Remember: when you change the clocks, change your batteries! 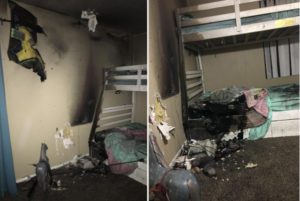 One example of a sprinkler save. Without sprinklers this fire could have been way worse.

They sure do! Fire sprinklers are the most effective way to protect your business and your loved ones from the threat of fire. We can’t even begin to calculate the number of lives that are saved each and every year from these systems.

Next, perhaps the biggest question we receive here at the NFSA…

Do Fire Sprinklers React to Smoke?

Fire sprinklers need to reach a predetermined level of heat to react. When this happens, the glass bulb or metal fusible link will break or pop off, and the sprinkler head will start pouring water on the fire.

Only the head closest to the fire will react!

Now, we would be remiss if we didn’t mention that there are fire protection systems that do react to smoke, but they are typically only in high hazard areas. So unless you live in an airport hangar, there’s no need to worry about  your cooking skills. 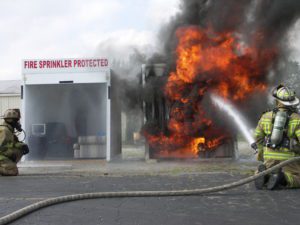 Fire sprinklers do not detect or react to vapes, e-hookahs, cigars, cigarettes, or any smoking products that emit smoke or water vapor, but that still doesn’t mean you should smoke!

Do Fire Sprinklers Have Cameras?

This question is most likely the result of a viral TikTok that circulated around the internet. No! fire sprinklers do not have cameras. Fire sprinkler systems exist separately from security systems.

Do Fire Sprinklers Turn off?

In the event of a fire sprinkler activation, the contractor will temporarily shut the system off to stop the flow of water, replace the head that reacted, and open the system again. It’s that simple!

Can Fire Sprinklers go off Accidentally?

When the glass bulb on a fire sprinkler head is broken, the head will begin to flow water. This is true for a majority of fire sprinkler systems. Luckily, fire sprinklers can be concealed behind a cover plate, which adds an extra level of protection and keeps the sprinkler  hidden, without compromising your safety. Odds are you’ve been in a fully protected area before and haven’t even noticed it. 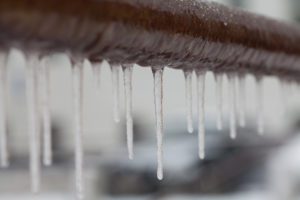 Fire sprinklers are at the same risk of leaking as regular plumbing. When they are not properly installed or insulated, fire sprinkler pipes can burst after freezing.

Luckily, there is a UL listed antifreeze available just for fire sprinkler systems that will keep them from freezing in the winter.

Fire sprinklers can also leak when they corrode. Corrosion is more common in dry systems than in wet systems, but it can degrade the pipes to the point where they begin to leak. Corrosion can also clog up sprinkler heads, seriously compromising their effectiveness in the event of a fire. There are several ways to prevent this, however, and one popular method involves pumping nitrogen into pipes and oxygen out of the system. Since corrosion needs oxygen to form, it can be stopped in its tracks when nitrogen is introduced.

The National Fire Sprinkler Association is your premier resource for fire protection, from training to in-person events, the NFSA offers something for everyone in this industry.

For more information about the NFSA and membership benefits, visit our membership page here.