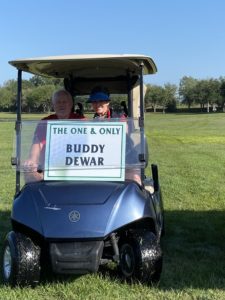 On April 4, 2022, The Florida Fire Sprinkler Association, a chapter of the NFSA and NFSA Team Members hosted the 27th Annual Buddy Dewar Golf & Skeet Tournament. Golfers and shooters from all over the country attended this event that honored Buddy Dewar. Buddy also attended, making this his first official outing since being hospitalized for 99 days. Buddy received a standing ovation as he addressed the group with a few words of gratitude for the great industry and the people who are part of it. The day welcomed 244 golfers and 80 skeet shooters with blue skies with a high of 80 degrees.

Golfers enjoyed themselves at the Mission Inn Resort at Howey in the Hills, Florida, while shooters had a bang-up time at Gey Ranch in Montverde, Florida. Mission Inn is a premier destination that boasts two golf courses: El Campeon and Las Colinas. Participants were able to play these classic golf courses and skeet shooters met at Gey Ranch, owned by Wayne Gey of Wayne Automatic, which is beautiful tree-lined acreage that Wayne opens to this group every year.

All golfers and shooters came together that afternoon for lunch, awards, and raffles. NFSA President Shane Ray and Florida Fire Sprinkler Association President Clark Gey presented on the state of the industry both nationally and locally. Both speakers highlighted the importance of unity when it comes to advancing legislative efforts. 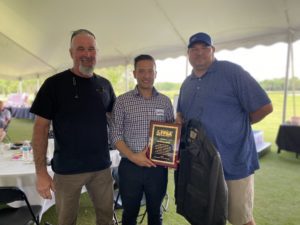 Clark Gey, FFSA president, and Brad Kinsell, FFSA 1st vice president, presented the “Champion of the Industry” Award to Captain Anthony Ortiz. This is the highest award given by the FFSA and it recognizes those who have gone above and beyond promoting life safety through the acceptance of fire sprinklers. Clark Gey then presented several game recognitions, including the top foursome, top skeet shooter, and longest drive.

The day ended with raffle drawings. The raffle prizes were amazing, and all were donated to the event. Raffles included a variety of gifts, including trips to Disney World, coolers, golf bags, fishing rods, and even a shotgun!

The NFSA would like to thank Lorrell Bush and her numerous volunteers for making this outing a success. The association would also like to thank its members for their raffle donations and for showing up to participate in this outing. We are looking forward to the 28th Annual Buddy Dewar Golf and Skeet Tournament. Watch for details. We hope to see you there!