Jeff Hugo and Michael Wilson of the National Fire Sprinkler Association’s Leadership team and Membership team had a productive tour of the Garden State last week. Included in this tour was a stop at Meadowlands Fire Protection in Secaucus, New Jersey. There, the team met with Executive President Rich Cericola to discuss Meadowland’s services, notable projects, and role as a fire sprinkler contractor in New Jersey.

Meadowlands Fire Protection, an EMCOR company, has been a name in the Northern New Jersey for decades now and has established a reputation as a reliable fire sprinkler contractor. The company was founded in the 1980s and Rich has been a member of the team since 1992. 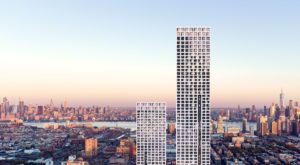 Rich shared that the company has handled projects all over the northern half of the state as well as in Manhattan. These projects vary from data centers to high rises. A few notable projects included the Journal Squared high rise apartments in Jersey City, The Modern in Fort Lee, The Valley Hospital in Paramus, and well as several other notable buildings in the area.

The company handles all design in house and will do some fabrication on site in its facilities. In addition to installing fire sprinkler systems, Meadowlands Fire Protection also has a large inspections division with a fleet of 13 trucks. This teams delivers round-the-clock care to customers around the area. Rich shared that this dedication to relationships and prompt service is the reason why the company has held on to many of its customers over the years. 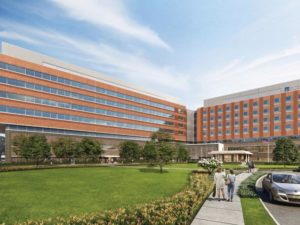 While the Meadowlands’ mission is to install and maintain fire sprinklers in New Jersey and protect lives and property, the company still find the time to give back to its community in meaningful ways. Rich showed the NFSA team several pictures from company fundraisers including the “Pink Hard Hat Event” where the company raised $100,000 to the John Theurer Cancer Center Breast Oncology Division at Hackensack university Medical Center. This was just one of several Pink Hard Hat events Meadowlands has sponsored in the past. Additionally, the company has also raised funds via golf outings for fallen firefighters and military veterans, and has donated to the New York Law Enforcement Foundation. 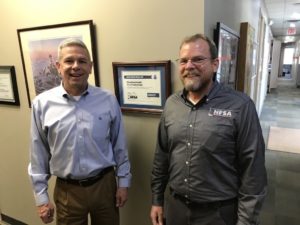 The NFSA staff worked to acquaint Rich’s design team with NFSA’s Expert of the Day service and set them up with their member accounts. Rich also shared that he thoroughly enjoys the camaraderie from NFSA’s golf outings as well as the New Jersey chapter meetings. He is active in NFSA New Jersey’s Joint Apprenticeship Committee as well as the negotiating committee.

For more information on Meadowlands Fire Protection’s mission to install and maintain fire sprinklers in New Jersey, visit their website at https://www.fgmech.com/meadowlands-fire-protection.