A Message from the President: 2021 Trip to the International Builders Show 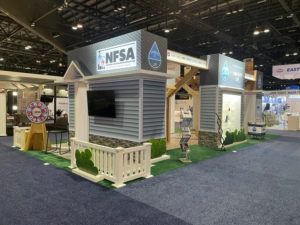 NFSA’s mission is “to save lives and protect property from fire through the widespread acceptance of the fire sprinkler concept.” The fire sprinkler industry is filled with great people, and the Future Leadership Committee (FLC) is certainly proof of that. It was great to have the Chair of NFSA’s FLC, Daniel Wake of Victaulic, on hand in Orlando, Florida at the 2022 International Builders Show. It was also great to have the support and presence of FLC members Lainey Liotta of Lubrizol and Darren Palmieri of Viking Group.

“The widespread acceptance of the fire sprinkler concept” is being accomplished in many ways, but especially during our attendance at the National Association of Home Builders (NAHB) 2022 International Builders Show (IBS). We observed a higher level of acceptance this year than anyone recalled from our last show in 2020. For example, the booth was filled with builders and general contractors seeking fire sprinkler contractors from North Carolina, Ohio, Florida, Maryland, Puerto Rico, Washington, and everywhere in between. The positive steps that have been made in the last 20+ years are tremendous, and we are, as NFSA Past Chair Larry Thau would say, “changing adversaries to allies.”

In Search of Fire Sprinkler Contractors

Ask any one of the great team members staffing the booth and they will tell you a common thread was builders looking for fire sprinkler contractors and related products. We gained many new contacts, and hopefully a few leads will come your way as a member. I personally have many stories to share, and I was only there one full day. I tried to figure out with our contractor members how many millions of dollars were represented in the potential projects shared with us at the booth. For example, the first hour the booth opened, I had a building owner come to the booth. He had plans for an eight-story apartment building in North Carolina and was looking for a contractor. There was also a general contractor from Nashville, Tennessee (my hometown area) renovating a recording studio with potential for residential, looking for a contractor. In the spirit of promoting our industry and the work of NFSA, I shared with him about the federal fire sprinkler tax incentives, and how his client could likely depreciate 100% of the cost of the fire sprinkler system in an accelerated rate. There are so many other great stories, and the leads were captured on the digital system for the IBS.

The History of Fire Sprinklers and IBS 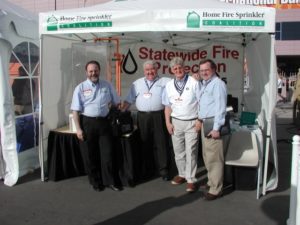 From the NFSA archives: HFSC staff at the IBS

I reached out to Peg Paul and Gary Keith, members of the Home Fire Sprinkler Coalition (HFSC) to see when HFSC first attended the IBS. As part of HFSC, I had been involved with the IBS and fire sprinklers since approximately 2004, while a fire chief. My memories of 2004 to 2010 were of “fun,” with our fire sprinkler game show and slot machines when the event was held in Las Vegas. However, we faced great animosity, and hostility in those early days.

Thanks to Peg and Gary, the Home Fire Sprinkler Coalition began attending the IBS at the 1998 Dallas event. Gary Keith, former Vice President at the National Fire Protection Association (NFPA), said, “I think Steve Muncy and Janet Knowles had to expense flak jackets.” Peg shared a few pictures and a lot of history that included: “HFSC’s last booth at IBS in 2016 was 1,500 sq ft. Actor Tom Clark hosted the game we had at the booth. Matt Klaus taught a CEU class in our booth that was well attended by builders.” Peg also recognized the vision of Jim Dalton to seek funding from NFSA’s Manufacturers Council to fund a larger booth with kiosks of each of the fire sprinkler manufacturers. There is a lot of history that the industry needs to know about the efforts to get to where we are today, which I hope to provide in a later edition of National Fire Sprinkler Magazine.

2020 A New Season for Sprinklers at IBS

With HFSC’s last year being in 2016, NFSA’s first year with a stand-alone 40 ft. by 20 ft. booth was 2020, just prior to COVID-19. The next year was in a virtual world, where we not only participated, but presented a program on the success of fire sprinklers in communities across the country. Well, 2022 was a homerun at the IBS and we look forward to many more.

NFSA’s presence would not have been as successful without our members who participated in the booth. A big thanks to General Air Products, JCI, Lubrizol, Reliable, Talco, Victaulic, and Viking. The team of staff from each of those members, along with NFSA staff, had the expertise needed to share the benefits of fire sprinklers, as well as the relationships with contractors across the country.

A special thanks goes to NFSA’s Manufacturers Council for their continued support of this effort, which costs over $100,000 per year. Also, a special thanks to the leadership of Kent Mezaros, Chair of NFSA’s Board, for his vision to tackle such a huge task. Our great presence in the giant exhibit space would not be as eye-catching and classy as it is without the committee appointed by Chair Mezaros, which was Jim McHugh, Darren Palmieri, Ray Freemont Jr., and Daniel Wake. Its continued success would not be possible without the hundreds of hours of staff time; thank you Vickie Pritchett, Terin Hopkins, and Dennis Wood. Also, a special thanks to FJ Fee who listened to Vickie Pritchett dream out loud about having a display that flows water, and to Matt Rouleau with Reliable Automatic Sprinkler Co., Inc. for all the work going into making that display a reality. It was a great addition this year and shows what can happen when we work together.

We’ve watched the attitudes of homebuilders change a lot since those beginning days, and we’re very happy that we are continuing this tradition and there to connect homebuilders with resources, contractors, and information. We really mean it when we say, “partners in progress” and we believe that homebuilders understand the importance of including fire sprinklers in the new homes they are building.