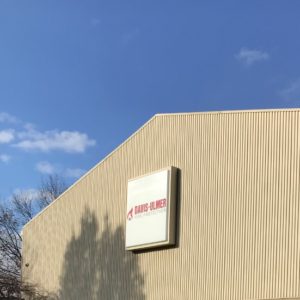 NFSA staff had the opportunity to sit down with Jason Stoler, vice president of Davis-Ulmer Fire Protection at the company’s Rochester, New York, office. Jason and the team discussed the company’s history, services, and relationship with the NFSA.

While Davis-Ulmer Fire Protection handles contracts throughout the country, Jason’s office focuses primarily on installing and maintaining fire sprinklers in Rochester, New York, and the surrounding areas. Jason and his team have built a reputation over the years as a premier fire sprinkler shop and have been responsible for several high-profile jobs throughout the area.

While Davis-Ulmer was founded in Buffalo, NY in 1923, the Rochester office opened in 1994 and offers both installation and service for its customers. Jason explained that his shop does a lot of NFPA 13 work and that his team is know for gravitating towards challenging and highly technical projects. The shop handles projects throughout Upstate and Upstate Western New York.

The Davis-Ulmer crew services a wide variety of customers, including hospitals, schools, and –most recently—higher education to install and service fire sprinklers in Rochester. Jason also mentioned that the shop is now handling several special hazards projects. This diversity of projects keeps the shop safe from any changes in the ebb and flow of the local market.

Davis-Ulmer and the NFSA: Partners in Progress

The incredible history of Davis-Ulmer from being founded by Herman Ulmer and Joseph Davis in 1923 to season under the leadership of Steve Ulmer (NFSA Board Member), and the current exciting season of growth as part of the APi Group can be read here or below:

“Since 1946, Davis-Ulmer Fire Protection has been on the front lines of the fire protection industry providing a wide range of services to our clients.

Davis-Ulmer is a third-generation family operated company, providing full service fire sprinkler, suppression, alarm, and security systems to customers across the Northeast. The company’s founder, Herman Ulmer, was born in 1896 to parents who emigrated to the U.S. from Germany. Herman left school in the 8th grade to get a job to help his family make money, and at 16-years old started working for H.G. Vogel, a New York City based sprinkler contractor. After gaining experience in the industry over the years, he relocated to Buffalo in 1923 and collaborated with a colleague Joseph Davis to open Davis-Ulmer Fire Protection The first employee of the young company was Herman’s son, Robert.

Robert Ulmer attended two years of engineering school in Missouri before serving in the United States Marine Corp in Korea from 1952 to 1954. Under Robert’s leadership the company began to expand and take on more business. In 1964 the Syracuse branch of Davis-Ulmer opened its doors in order to take advantage of business opportunities in Central and Northern New York. Robert successfully ran and grew the business until 1987, this included bringing his two sons, Steve and Paul into the family business.

Paul Ulmer started his career with Davis-Ulmer as a shop fabricator in 1975. He began his sprinkler fitter apprenticeship in 1977 and spent seven years in the field before becoming Executive Vice President in 1987. He retired in 2012. Steve Ulmer began his career as an apprentice in 1972 and became a fitter by the age of 21, spending a total of 8 years in the field. In 1981 Steve moved out of the field and into the office where he became the Vice President of Sales, the Executive Vice President in 1983, and eventually succeeded his father as President of the company in 1987. Under Steve’s guidance, Davis-Ulmer expanded again to open the Rochester branch in 1988 and another office in the Corning area in 1990.

In 1996 Davis-Ulmer made itself more diverse by adding leading fire suppression and alarm brands to our arsenal. This brought around the Special Hazard Alarm and Detection division which allowed the company to service its customers on yet another level. The company also made another move toward advancement in 2005 when it was acquired by the APi Group Inc., thus linking Davis-Ulmer to Fire Protection and specialty construction companies across the country. Today, Steve Ulmer the former President of Davis-Ulmer acts as COO to APi Group Inc. continuing to provide leadership to the Davis-Ulmer team. In over 70 years of business, Davis-Ulmer Fire Protection has developed a great reputation with both customers and contractors in the region.

The company’s mission statement speaks for these values: “‘Be the leading single source fire protection company in the Northeast by providing quality products and services at fair and equitable rates.'”

The National Fire Sprinkler Association represents fire sprinkler contractors and suppliers and manufacturers throughout the country. To learn more about our members’ efforts to save lives and protect property, all while advancing the industry, check our blog posts regularly!

To learn more about how NFSA membership can benefit you and your company, visit nfsa.org/join/.