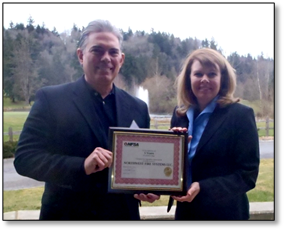 From the archives: Clark Potter, President of Northwest Fire Systems receives a five-year membership plaque in 2014 from Northwest Regional Manager Suzanne Mayr. At the time, Clark served as Chair of the Puget Sound NFSA Chapter.

While Service manager at SimplexGrinnell, Clark was asked to join the Tyco Six Sigma group. Clark earned a “Six Sigma Black Belt,” managing the well-known process improvement methods that guide a company’s efforts to increase productivity and worker safety while cutting costs. Clark helped develop and implement Tyco’s deficiency program across the country.  That tool has become a large part of the foundation of the inspection and testing programs at many companies today.  At Cosco, Clark served as District General Manager, overseeing branches in Portland, Seattle, and Anchorage.

Building a Name as a Puget Sound Fire Sprinkler Contractor

Each of these roles provided a foundation for what would become Northwest Fire Systems LLC (NWFS), a a Puget Sound fire sprinkler contractor company Clark started in 2008 along with his wife, Mary.

Northwest Fire Systems started in a 1,000 square foot house in Renton, with the tiny mother-in-law apartment serving as the company’s first office. A van, employees, a union contract, and steady sales growth followed.

NWFS is a full-service fire protection company, providing “out of the ground” fire sprinkler system installations, service inspections and alarm system. Now located in a 13,000 square foot facility in Kent, Washington, the company has built a solid niche in tenant improvement and retrofits.

“We are used to working in healthcare settings and having to comply with infection control protocols as well as working around patients and their families,” Clark said.

With an eye to continual improvement and growth, Clark participated in a peer group called “Vistage” for a few years where he was able to gain valuable insight and ideas from his peers. Coupled with an investment in new software, the company increased its presence online, upgrading its website and using social media to showcase projects, sprinkler saves and employee efforts.

The staff has embraced the new initiatives, and their enthusiasm shows up in the company’s excellent customer reviews throughout the Puget Sound region. When a staff member receives positive customer feedback, it is acknowledged within the company.

Another fundamental value for Northwest Fire Systems: involvement in the industry.  With a nudge from NFSA Area Director James Boulanger, Potter joined NFSA soon after the company was formed. Clark served as Puget Sound Chapter Chair for several years, and always bring several employees to the Chapter meetings.

“I especially appreciate the Puget Sound Chapter meetings—they give me an opportunity to get together with my friendly competitors,” Clark said, noting that these networking opportunities often lead to companies cooperating on projects, such as sharing past project information or referrals. “Not one of us can do all the work,” Potter noted. “We are willing to help each other.”

Clark appreciates how NFSA helps him and his staff stay on top of changing codes and standards, learning what issues are emerging, and keeping abreast of technical innovations.

In addition to attending Chapter meetings, NWFS staff regularly participate in local NFSA trainings and benefit from NFSA’s on-line training and technical publications. “All of our designers participate in Tech Tuesdays, and they use the Expert of the Day program,” Potter said. “Our service people also are able to call in with questions.”

To learn more about Northwest Fire Systems LLC, visit their website at https://nwfiresystems.com/.