Home / Thirty Years in the Making – One Meridian Plaza Fire

Thirty Years in the Making – One Meridian Plaza Fire 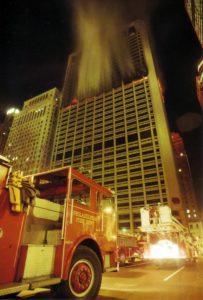 The One Meridian Plaza fire continues to be one of the most iconic high-rise structure fires in American history. On February 23, 1991, a fire caused an unprecedented fire loss of over $4 billion dollars in litigation, $100 million in direct property loss, 24 firefighter injuries, eight firefighter near-misses and the ultimate tragic loss of three Philadelphia firefighters.  Captain David Holcombe, Firefighter Phillis McAllister, and Firefighter James Chappell gave their lives trying to ventilate the stairwell and succumbed after becoming disoriented in heavy fire and smoke conditions on the 28th floor. There were multiple factors culminating in this tragic fire, but one thing remains clear, the lessons learned from this devastating event would change the requirements for standpipes, automatic fire sprinklers and the maintenance of fire protection system forever.

Almost a decade before the United States Congress mandated the National Institute for Occupational Safety and Health (NIOSH) to investigate all work-related firefighter fatalities, the U.S Fire Administration was investigating significant fires throughout the United States involving major loss of life or property. These reports know as U.S. Fire Administration/Tactical Reports Series were used to disseminate significant lessons learned or recommendations, throughout the fire service, from major events like the One Meridian Plaza fire. The reports would involve thorough investigations by leading experts to evaluate incidences and to generate an objective report of findings. The reports would serve as technical substantiation for direct implementation of those lessons learned or recommendations, not only within the fire service communities, but all areas related. 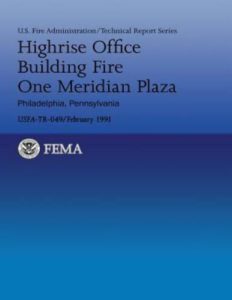 The US Fire Administration released its findings of the tragic event in their USFA-TR-049/February 1991- report, Highrise Office Building Fire, One Meridian Plaza, Philadelphia, Pennsylvania. The report provides an overview, summary of the building, fire protection systems and the fire itself. It evaluates the incident with firsthand accounts, current building and fire regulations, data, and conclusions. The recommendations begin on page 16 of the report, with an opening statement that reads, Perhaps the most striking lesson to be learned from the One Meridian Plaza high-rise fire is, what can happen when everything goes wrong. This bold statement comes from Roger Ulshafer, the Philadelphia Fire Commission at the time of the fire, who was quoted saying:

There is no fire department in the world that can control a major fire in a high-rise building on an upper floor, if the fire protection and redundancy that are built into those system all fail.

There has always been a longtime response mechanism to blame catastrophic events on everything failing, and not to recognize what we do not understand or the realization that not all systems will perform to our expectations. The simple reality is a perfect storm is an event in which a rare combination of circumstances that are drastically compounding lead to a catastrophic event. One Meridian Plaza was simply one of those perfect storm events.

The building had been in the process of being renovated and upgraded with automatic fire sprinkler protection when on that fateful day, February 23, 1991, at 2023 hours, the Philadelphia Fire Department would respond to the location for a building fire. The Philadelphia Fire Department’s first arriving engine company would report smoke and fire showing from only one window on the mid-section of the 38-story high rise office building in downtown Philadelphia. At the time of the fire, only four floors had complete automatic fire sprinkler coverage, floors 30, 31, 34t and 35.  Three had partial protection, floors 11, 15 and 37. This 12-alarm fire started on the 22ed floor and was completely unimpeded by fire protection systems. It would free burn for almost 24 hours, engulfing eight floors until reaching the 30th, floor, where the fire progression was halted by the activation of only ten fire sprinklers. The 30th floor had little fire damage and most of the floor contents were salvaged.

Today, we have seen the model codes address that life safety concern, requiring all new high-rises to be protected, but that same requirement for existing high-rises would prove to be a more difficult challenge. Even with the requirements for existing buildings to retrofit, it has been a slow or nonexistent implementation that continues to plague us with tragic outcomes. This cannot be demonstrated any clearer than the 2019 three-alarm unprotected high-rise fire that claimed the lives of five people in a public housing apartment building in Minnesota. While this building was constructed prior to the life safety requirements for new construction mandating the installation of automatic fire sprinkler protection, the known hazard was continually ignored and eluded for years, even with those national requirements mandating the installation of automatic fire sprinklers in existing high-rise buildings. The National Fire Protection Association (NFPA) 1 Fire Code made the significant change in the 1997 edition, mandating existing high-rises to be fully retrofitted with automatic fire sprinklers within twelve years from adoption of that code. Today, we continue to see a lack of compliance and the continued unnecessary loss of life in these unprotected buildings.

The third and fourth recommendations led to considerable change in fire department standpipe operations, numerous changes to NFPA 14 Standard for the installation of Standpipes and Hose Systems and the creating of an entirely new, 1992 first edition of, NFPA 25 Standard for the Installation, Testing, and Maintenance of Water-Based Fire Protection Systems.

Most modern-day fire service tactical considerations are based on some hard lessons learned from this one incident and continue to evolve with standpipe hose considerations and deployment. The report highlighted the inconsistencies between the antiquated standpipe design criteria, which had been developed decades before, and the lack of fire service performance needs implemented into the design criteria. While the disconnect between standpipe design expectations and fire service operational tactical needs continue to narrow, it highlights the need for additional training.

As a direct result of the fire, the 1993 edition of NFPA 14 underwent a complete reorganization and attributes the substantive changes made directly to experience with standpipe systems under direct fire conditions. This is a link to the recommendation for change found in that report -USFA-TR-049. This was the substantiation needed to allow the NFPA 14 Technical Committee members to make long overdue changes to flow rates, pressure increases, and location of hose connections. Minimum and maximum pressures in new construction were increased to a minimum of 100 psi and a maximum of 175 psi. Pressures that exceeded that would now be required to be reduced by a listed pressure regulating device capable of limiting both static and residual hose connection pressures, between the new minimum 100 psi and 175 psi maximum.

The creation of NFPA 25 was to address the lack of overall fire protection system inspection, testing and maintenance highlighted throughout the report. Prior to the 1992, the only guidance afforded to building property owners for ITM was in the form of recommendations found in NFPA 13A Care and Maintenance of Sprinkler Systems and NFPA 14A Recommended Practice for the Inspection, Testing and Maintenance of Standpipe and Hose Systems. The standard combined those recommendations and now includes enforceable language for property owner requirements. 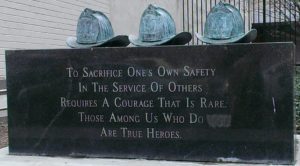 We cannot not forget the sacrifices made and must continue to forge forward in the quest to implement these recommendations. Take a moment on February 23 to remember Captain David Holcombe, Firefighter Phillis McAllister, and Firefighter James Chappell of the Philadelphia Fire Department for their ultimate sacrifice.