Why aren’t all Fire Hydrants Red?

The consistency of color coding is widely varied by localities and jurisdictional preferences. It is also governed by many national agencies like American Water Works Association (AWWA), Occupation Safety, Health Administration (OSHA), National Fire Protection Association (NFPA) and the International Codes council (ICC) to name a few.  Typically, there are three types of fire hydrants, public, private and yard.

Those hydrants supplied by public mains and water supplies are referred to as public fire hydrants. These fire hydrants are classified by their rated flow as outlined in NFPA 291 Recommended Practice for Fire Flow Testing and Marking of Hydrants. The bonnet or top and the caps should be painted with capacity indicating colors designating class and flow.

The recommendation also suggests that all barrels or bodies of fire hydrants be painted a reflective chrome yellow, unless other colors have been locally adopted. This marking is used for rapid identification of flow and class of fire hydrants. A public fire hydrant is supported and supplied by a public water supply and should be rated for flow, at 20 pounds per square inch of residual pressure. Most public water systems are designated as class A or B systems delivering on average 1000 gpm at 20 psi as a target flow. That residual pressure is used as many state health departments do not allow pressures lower than 20 psi.

Examples of Class A & B public fire hydrants 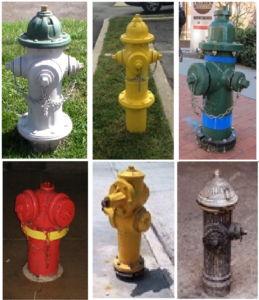 It is recommended that public fire hydrant get flushed annually and receive a full flow test every five years verifying capacity and the class markings. NFPA 25 The Standard for the Inspection, Testing, and Maintenance of Water-Based Fire Protection Systems does not have any specific requirements for public fire hydrants and leaves that up to the discretion of the local water purveyor.

The second type is private fire hydrants which are consistently red in most jurisdictions.  These hydrants are supplied by privately owned mains but can be supplied by a private water or public water source. NFPA 291 recommends that the fire hydrant be painted a single uniformed red if they are accessible on public street but allows an owner discretion if the hydrant is enclosed on private property.  Red color barrel is used to indicate that the hydrant is not on a public water main but meets the minimum 500 gpm flow at 20 psi.  Inspection, testing and maintenance requirements for private fire hydrants is addressed by NFPA 25, requiring an annual flush, and full flow tested every five years. 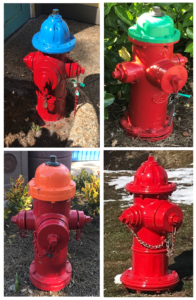 Lastly, we come to the third type which is the yard hydrant. Yard hydrants are not intended to support fire operations. Yard hydrants are found on private mains usually 4 inches or less and will have a private water source if supplied. These hydrants are used to move water from one point to another by private owners and do not have any specific requirements for flow, indicating color or inspection testing and maintenance. Color of these hydrants often varies and are sometimes painted misleading indicating colors as owners seek color unity when guidance in not provided.  Extreme caution should be used if the utilization of these types of hydrants is required. 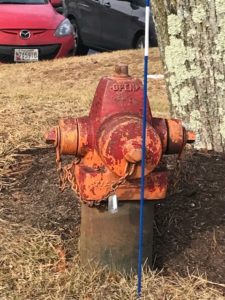 While the uniformity of color differs across the nation, the basic underlying recommended color schemes seems to present itself in one fashion or another in most jurisdictions.