This year’s donation was the largest the Foundation has ever made to the Burn Center: $47,500. That is $5,000 more than last year’s record-setting donation. Over the past 24 years, the generous members and supporters of the Minnesota Chapter of NFSA have presented over $1.3 million to support the unique programs, equipment, and specialized burn survivor camps operated by the Burn Center.
This year’s Burn Aid was held at the Dellwood Country Club on a beautiful, sunny, warm day. 92 golfers participated, including Michael Herzog, a burn survivor and the keynote speaker at the evening’s award dinner. Michael is a former patient of the Burn Center. In humble fashion, which held everyone spellbound, Michael told the story of how he survived a horrific propane explosion in a fish house in March 2018. Burned over 80% of his body, doctors expected he would be in the burn unit for months. Miraculously, he was released in less than 40 days. Michael, a star college athlete, continued to show his athletic abilities by winning the golf tournament’s award for Longest Drive. Michael’s father, Mike Herzog, made an impromptu speech that recapped a family’s appreciation for the Burn Aid event and the Regions Burn Center staff.

The Regions Burn Center is one of three burn specialty centers in Minnesota, HCMC in Minneapolis and Miller-Dwan in Duluth being the other two, and these three are essentially the only burn specialty centers between Denver and Chicago in the upper Midwest. Hundreds of in-patient burn survivors are cared for at the Center every year, and several thousand more are treated via their “telemedicine” capabilities. The Center has 10 general population rooms and 8 ICU rooms specifically set up and equipped for burn survivors. The staff of the Center are also the “wound care specialists” for the hospital; besides burns, they care for “flesh eating bacteria” infections, frostbite, and other special wound situations. 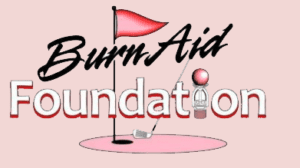 The annual Burn Aid Charity Golf Tournament was started by members of the Minnesota Chapter of the NFSA, the State Fire Marshal Division, and the Regional Hospital Burn Center. The Burn Aid Foundation was formed as a 501 (c) (3) charity in 2018. Plans are already being laid for next year’s historic 25th anniversary event on Monday, September 13, 2021. Please mark your calendars – we’d love to see you there!