As a former Authority Having Jurisdiction (AHJ) a two-owner system is something that sounds blasphemous and is hard to type even now. Imagine this, a single building divided by a fire wall (which by definition is now considered a two separate buildings), two owners, two addresses, two systems?

A common wall located on the lot line between two adjacent buildings is considered a party wall under Section 706 of the IBC. This wall is regulated as a fire wall in this section. A party wall can be considered in lieu of separate and distinct exterior walls adjacent to the lot line. The hazard created by neighboring buildings adjacent to each other is further addressed through the requirement that no openings be permitted in a party wall. Therefore, by creating this party wall, separate buildings are created even though it is one single structure. As an AHJ allowing a single automatic sprinkler system to protect, in essence, two building was a not a wise practice. Some of the reasoning is you had two different owners, two different addresses, lack of access to the system components by one of the owners, and paperwork nightmares. Additionally, it could cause confusion for responding fire departments to locate riser rooms and appropriate FDCs.  Therefore, this practice was not encouraged in the approval process and would often require two separate systems. 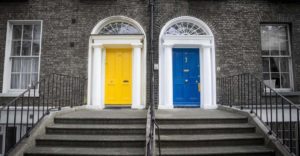 In previous editions, of the International Building Code (IBC) it had not directly prohibited a single sprinkler system protecting this type of space. Although it was not directly permitted either. However, in section 4.5.4.1 of NFPA 13 (2019), it specifically permits multiple buildings that are attached by canopies, covered breezeways, common roofs, or common walls to be protected by single sprinkler system riser. This has been permitted in the standard for some time. This has created a juxtaposition in the building code enforcement industry. Having a single system protect two buildings was left up to the individual AHJ’s having to make this judgement call and only being permitted through the alternate methods and design avenue. Obviously, this makes the cost projects significantly more expensive and not at all cost effective for the building owners. This caused many projects to be abandoned or to be sat on the back burner until additional funds could be procured. Additionally, there was no guidance provided to AHJ or contractors on how to handle such situations until the 2018 edition of the IBC. One exception now provides guidance and direction on this topic.

In the 2018 edition a new exception to the party wall rule was inserted into the body of the building code. The exception states that fire walls are no longer required on lot lines dividing a building for ownership purposes, therefore, no longer making the structure two different buildings. The building’s aggregate height and area, on both sides of the lot line, must not exceed the permitted maximum height and area requirements of the IBC.

Additionally, the exception provides guidance to AHJ and the building owners. It provides needed documents for a proper review by the AHJ. The building owners should provide to the AHJ the following: access easements and contractual agreements that permit the owners of portions of the building located on either side of the lot line access to the other side for purposes of maintain fire and life safety systems necessary for the operation of the building.

This exception creates a controversial topic to the fire sprinkler industry and building owners alike and much care should be taken in this approach.  While the IBC and NFPA 13 permit this single system approach, not all AHJ’s are still going to be comfortable permitting such a system. One should carefully analyze every aspect of the properties to ensure that the hazards present are being properly accounted for and addressed.