Members and supporters of the Minnesota Chapter of NFSA and the Burn Aid Foundation met on September 14th for the 24th Annual Burn Aid Charity Golf Tournament. The event was held at Dellwood Country Club on a beautiful sunny summer day. Donations from the event support the Regions Hospital Burn Center. Over the past 24 years, event sponsors and supporters have provided more than $1.2 million to support programs and specialized equipment in the Center and at the various summer and winter camps hosted by the Burn Center staff for fire survivors and their families. 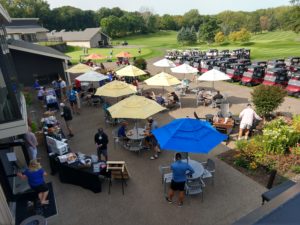 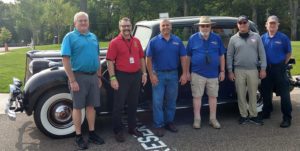 The event was held on a beautiful, sunny, warm day. 92 golfers participated, including Michael Herzog, a burn survivor and the keynote speaker at the award dinner held later in the evening. NFSA President Shane Ray and Gary West, NFSA Director of Field Operations and Government Relations, arrived in style in a 1938 V-12 Packard owned, restored, and driven by NFSA Minnesota State Coordinator Tom Brace. 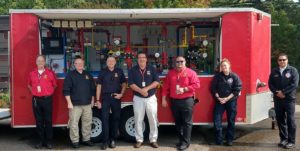 Minnesota State Fire Marshal Jim Smith and members of his staff put on a fire sprinkler demonstration prior to the foursomes hitting the course at noon. A crew from the White Bear Lake Fire Department assisted with the demonstration. 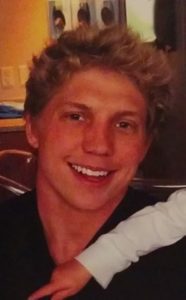 The evening awards banquet featured remarks by several VIPS, including President Ray, Marshal Smith, and members of the Regions Hospital Burn Unit. The keynote address was made by Michael Herzog, a former patient of the Burn Unit and a burn survivor. In humble fashion, which held everyone spellbound, Michael told the story of how he survived a horrific propane explosion in a fish house in March 2018. Burned over 80% of his body, doctors expected he would be in the burn unit for months. Miraculously, he was released in less than 40 days. Michael, a star college athlete, continued to show his athletic abilities by winning the golf tournament’s award for Longest Drive. Michael’s father, Mike Herzog, made an impromptu speech that recapped a family’s appreciation for the Burn Aid event and the Regions Burn Center staff.

The capstone of the evening was the presentation of a check to the Burn Center by Sean Flaherty and Matt Gallagher in the amount of $35,000. That initial amount was increased to $45,000 by a private donation made just after the event! The final donation will likely swell to over $50,000 after all bills are settled. A final, formal check presentation will be made at the Burn Unit at a later date.

Burn Aid was started by members of the Minnesota Chapter, the State Fire Marshal Division, and the Regional Hospital Burn Center 24 years ago. The Burn Aid Foundation was formed as a 501 (c) (3) charity in 2018. Plans are already being laid for a historic 25th anniversary event next year. Mark your calendars, the Burn Aid will be held on Monday, September 13, 2021. We hope to see you there!