On June 10, National Fire Sprinkler Association (NFSA) achieved another milestone by presenting tailored training and assistance to local officials. When civic leaders in the small central Iowa town of Nevada (“Nah-Vay-Dah”) approached NFSA staff for strategies and recommendations for retrofitting their downtown historic district with fire sprinklers, NFSA staff and members from around the nation responded with a Fire Team NFSA seminar focused on retrofit strategies and solutions in historic buildings and historic districts. The event was significant in two ways: it was the first ever Fire Team event focused on historic building retrofit projects, and it was the first time a Fire Team NFSA seminar was held using a blended format of live and virtual presenters.

Nevada is located about 30 miles northeast of Des Moines, Iowa, and about 7 miles east of Ames.  The town was built in the mid-1800’s and has a historic district about 6 blocks long by 3 blocks wide that is centered along the town’s Main Street.   Structures in the historic district are predominantly 2-story “taxpayers,” with commercial on the ground floor and residential (or future residential) on the upper floor.  The buildings were built in the 1860-1910 era.  Interestingly, the town’s downtown district suffered two significant fires in the 1880s, and the town’s current leaders did not want to lose their town’s history or identity to another devastating fire. There are roughly 125 businesses occupying approximately 75 buildings in the historic district. 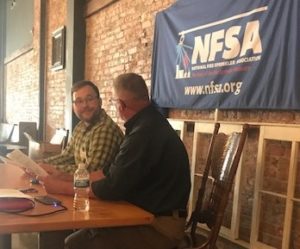 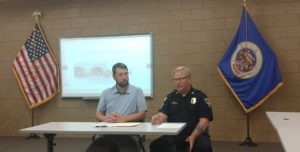 NFSA President Shane Ray discussed some of the notable fires in historic buildings and presented a wealth of information on both fire propagation and sprinkler effectiveness. His presentation was filled with research results, pictures, and examples. He discussed the social and economic impact that a devastating fire can have on a community and the positive impact of public fire protection policymaking. NFSA Executive Officer Vickie Pritchett and CPA Jenny McCabe, from Copeland Buhl, provided details of the significant tax incentives available to business owners in section 179 of the Tax Cuts and Jobs Act. Their presentations provided real-world examples and provided audience members with some of the significant tax tips and strategies that should be considered by building owners making qualified building improvements.

Description automatically generatedMr. Jon Augustus, a Nevada community leader and the owner of one of the beautiful buildings in the town’s historic district, presented some of his personal discoveries and decision-making involved in the installation of a fire sprinkler system in his historic building. Jon is a tax professional of the Allen L. Kockler Company, and owns the iconic building that houses that business. Jon provided some exceptional insights on his project costs, the decision points he considered, and his suggestions for both civic leaders and other business owners. His interview captured the process of discovery and decision faced by the owners of other historic buildings around the country.

The final live presentations of the day were provided by two sprinkler contractors servicing the central Iowa region: Dan Broich of Viking Automatic Sprinkler, and Arita Balken of J. F. Ahern. They provided building owners with examples of historic building retrofit projects and presented recommendations, considerations, and lessons learned from a contractor’s perspective.

The video presentations from the Fire Team seminar can be found below. Together, they provide a comprehensive look at sprinkler installations in historic buildings, and the considerations and strategies for success. They were all well received by Nevada officials, as well as our online audience. 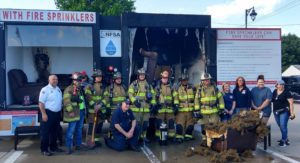 The final portion of the Fire Team seminar was a live side by side demonstration held in front of the Nevada City Hall. NFSA staff members from the Minnesota Chapter conducted the demonstration. Stiff winds and a broken sprinkler pipe generated a little “extra excitement,” but the crowd – and the video audience – saw smoke alarm activation in about 20 seconds, sprinkler activation in less than 30 seconds, and a dramatic flashover in just two minutes. Watch the video here:

The seminar presenters provided some great lessons for the Nevada civic leaders and business owners, and for those in other parts of the country. The seminar reinforced the need to protect the economy, culture, and history of older buildings. It also demonstrated the importance of preserving a community’s unique “identity,” while reminding viewers that “it’s not preserved until it’s protected.”

NFSA staff also learned some valuable lessons on hosting blended format seminars and proved that NFSA can deliver some very targeted training and information using a multi-site production in the virtual environment. This Fire Team NFSA seminar is available to other jurisdictions, and the case studies and presenters can be tailored to the specific needs and desires of a local community.