Tis the season for calibration

Normally this is the prime season for testing fire pumps, aside from dealing with the COVID pandemic. Many fire protection companies, businesses, and facilities test their fire pumps between June and September, that is of course, for those states that have to worry about freezing weather.  One of the most important components of testing fire pumps is the testing equipment – specifically the calibrated gauges.  Too often, once pump testing season is over, the gauges are forgotten until June when they are needed again, but it is too late. In many cases the same uncalibrated gauges will be used for a pump test, you know until we can get time to send them out for calibration, which is probably the end of this testing season.  Remember, if the gauges have not been calibrated, they shouldn’t be used.  NFPA 25 states that pump test gauges must be calibrated annually and be within 1% accuracy, unlike system gauges which have a 5-year requirement at a 3% accuracy.

NFPA 25 (2020), 8.3.3.5.2 Gauges, transducers, and other devices, with the exception of flow meters, used for measurement during the test shall be calibrated a minimum of annually to an accuracy level of 1 percent.

It is important to take proper care of gauges, not only because they cost nearly $500 for a set of two with calibration certificates, but if they are left in vehicles they can be subjected to extreme temperatures. This includes hotter climates like California and Florida typically have in summer months. Analog gauges can freeze or build pressure internally from heat, and digital gauges have electronics, if you have ever left electronics in a car you know the affect this can have. Ideally technicians will have them in a nice hard case or similar to keep them from getting thrown around in the back of their trucks, and this also makes it easy to take the gauges inside with them every day. 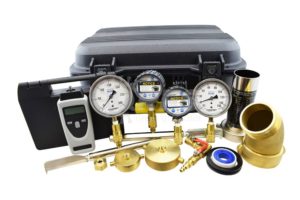 As a service manager, it may be a good idea to assemble a complete pump test kits that includes hose monster inserts of different sizes, tachometer, multi-meter, pump gauges, hose monster gauges, batteries, reflective tape for the tachometers, and, most important, a copy of the gauge calibration sheet. Technology has changed, and there are many more options for testing pumps with differing tools.  It does not matter if a liquid-filled or digital gauges are used; they both have their own issues with temperatures and being bounced around in a vehicle.

One of the biggest mistakes during a pump test is, failing by a small margin just to find out in the end that the technician didn’t compensate for the gauge error.  For example, if a 500 psi gauge is being used, it could have an error of up to 5 psi.  Typically, a 100 psi gauge is used on the suction side (usually compound for tank and cistern tests), which would be allowed only 1 psi of deviation. That is a total of up to 6 psi in gauge error.  If the technician is not aware that the gauge may not be 100% accurate, it could result in a failed pump test. This could be a costly mistake, but easy to account for, assuming the only issue was gauge error.

Gauges could be, but do not have to be, sent out for calibration. A test rig could be made to save a few dollars depending on how many gauges a company wishes to calibrate. However, the test gauge that is being used to calibrate other gauges needs to be certified.  The certification should by in accordance with ASME B40.100, Pressure Gauges and Gauge Attachments and completed by an approved testing laboratory such as the National Institute of Standards and Technology (NIST). Typically, the cost to certify a 300 psi gauge is less than $100 but will depend on the maximum pressure of the gauge.

In the example provided you can see the results of the certified gauge as compared to the unit under test gauge (UUT). In the test report, a 200 psi gauge (UUT) was tested and as you can see there is no deviation for this particular gauge. Most gauges are accurate in the middle third of the gauge.  This is important because if you have a suction supply of 40 psi and you are using a 300 psi gauge on the suction, it may not be in its most accurate range.  If it were a 100 psi gauge, then it would be in its middle third of the gauge and most likely its most accurate range of operation. This can have an effect when using high pressure gauges on the pitot or hose monsters.

Fire pump tests are not difficult and there are many factors that need to be considered to ensure satisfactory results.  Care of your equipment is necessary to assist in achieving the best possible results when testing fire protection systems. 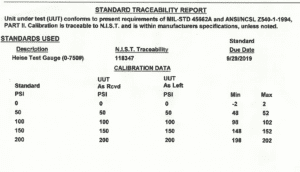