A self-proclaimed “Sprinkler Nerd,” Chase Browning has immersed himself in all things fire sprinkler. He grew up in a fire sprinkler contractor family, working in the industry for 25 years.  He joined the Medford, Oregon fire department staff as a deputy fire marshal in 2013.  He is an instructor on both a local and national level, and he chairs the Oregon Fire Sprinkler Coalition. He serves as a principal member on several NFPA technical committees, including 13, 13D, and 13R, and is one of the few AHJs to serve on NFSA’s Engineering and Standards Committee. He has served as a technical panelist on several Fire Protection Research Foundation projects, as well as an active participant in Oregon’s code development and adoption process.

As fire sprinkler advocates realized traditional messaging about life-saving residential fire sprinklers was not convincing developers to embrace them, the HFSC focused on an incentives program. Browning and his colleagues at the Medford Fire Department were early champions of this concept, serving as one of the pilot sites to prove that early planning with developers could result in an increase in voluntary installation of fire sprinklers.

As part of his many advocacy efforts, Browning was instrumental in building two fire sprinkler burn trailers, one from a $10,000 Bringing Safety Home grant, and one in conjunction with the Ashland Fire Department through a FEMA grant. With Browning’s support, the Oregon Fire Sprinkler Coalition has developed a wide range of educational presentations, which are posted on the Coalition website and used across the state. As Coalition Chair, Browning demonstrates his ability to bring together a diverse group of advocates to tackle issues unique to Oregon. 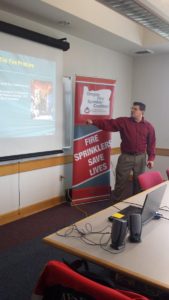 Browning is an enthusiastic teacher, serving as National Fire Academy instructor and an adjunct faculty instructor at southern Oregon’s Rogue Community College.  For the past three years, Browning has taught classes for the NFSA from Washington to Texas. With his depth of experience as both a contractor and AHJ (as well as a clever wit) Browning consistently draws rave reviews from his NFSA class attendees.

It is his involvement on the national level that brings Browning the most professional fulfilment. Chase was instrumental in proposing successful changes to sprinkler spacing criteria in the UL 1626 standard which now allows for optimized sprinkler designs through new digital residential water meters.  As a result of these changes, national sprinkler manufacturers of residential sprinklers have added a 15’ x 15’ spacing option to some of their sprinkler inventory.

On a personal level, Chase is a father of two, 9 year old Weston and 24 year old Raven. His wife Taneea is a local city council member and executive director of a nonprofit that encourages hands-on education.

As the Bringing Safety Home Award recipient, Browning was awarded a $1000 grant to further fire sprinkler advocacy and educational efforts in his community.