In recognition of International Women’s Day March 8, 2020, Houston Television Channel- CW 39 hosts an annual Remarkable Women contest for the Houston area. Justina Page was nominated by her son Joseph Page. She was picked as one of four finalists out of many nominations. The Amos House of Faith was also featured in this interview.

Justina Page is resilient and driven. She didn’t let a horrific accident stop her from fulfilling her purpose of helping others. Her son, Joseph, talks about her with admiration. “My mother, she’s obviously an inspiration. We get all kinds of emails and notes from people telling us how she’s helped them, and how the things she’s said that have touched them,” he explained.

Justina remembers waking up to an explosion. “TV’s popping, smoke and darkness everywhere,” Page said. She and her husband did everything they could to save their six children.

“I’m running through fire trying to get to them – All for a bookshelf to fall on top of me and trap me. That’s why I got burned so severely, ” she recounts. One of her twin sons perished in that fire and Justina was in a coma for six weeks. Doctors thought she would not survive. “We had zero percent chance of making it,” Page explains.

But she not only survived, she thrived. She turned this devastating tragedy into a triumphant idea, “I’m going to memorialize my son’s memory. I opened The Amos House, a non-profit organization to help those affected by burn trauma. “Justina has gone on to write books, do TED Talks and is now starting a project called Texas Burn Community Connect.

Her son affirms that his mom is the most resilient woman he knows. “I am inspired by the level of resilience she’s shown and turned something so tragic into something so beautiful.” 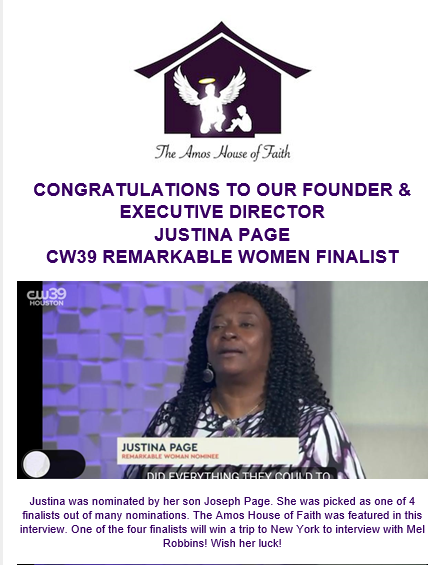 Justina is an advocate with Common Voices.