NFSA’s Roland Asp provided an “Overview of NFPA 13D Systems” training for approximately 100 fire officials in attendance, which highlighted the major differences between the scope and purpose of NFPA 13D Systems as compared to NFPA 13 & 13R Systems. NFPA 13D is a residential sprinkler design standard that is primarily focused on one- and two- family dwellings and manufactured homes. The intent is to provide an affordable sprinkler system in homes while maintaining a high level of life safety.

HFSC Peg Paul’s presentation titled “Home Fire Sprinkler Incentives” provided fire officials with important “tradeups and incentives” strategies being successfully offered to developers across the country that truly capture the essence of “win-win” partnerships. The community risk reduction benefits provided to the community by residential sprinklers are realized while the developer recovers significant cost saving benefits offered by the incentives.

In 2017, a survey was offered to fire departments across the country that revealed some interesting results. Fifty-five percent (55%) of these fire officials were unaware they could offer incentives to developers to install residential fire sprinkler systems and of the remaining forty-five percent (45%) who were aware, only eight percent (8%) had extended such an offer.

This same survey was then conducted with business developers and the homebuilder community, and only nine percent (9%) were aware of the cost savings available through tradeups and incentives, and fifty-five percent (55%) would be interested in protecting homes with sprinklers if they were offered by local jurisdictions. 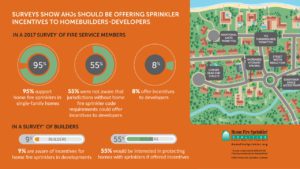 The actual homeowner is the ultimate benefactor when all stakeholders involved come together to implement these incentives. Another survey found that seventy-four percent (74%) of homeowners say they would be more likely to purchase a new home with sprinklers than without them.

Trade ups or incentives allow the developer to add additional units through one or more of the following:

If you have any questions or comments, please feel free to contact me,