NFSA At The Construction Technology Trade Fair In Chaska, MN

The Trade show is an annual event jointly hosted by the Upper Great Plains Region III of the International Code Council (ICC) and the Association of Minnesota Building Officials (AMBO). The trade show drew more than 400 local fire, building, and code officials this year. Although traffic at the NFSA booth was fairly slow, Tim and Joel enjoyed talking with the fire and code officials who did drop by – especially former coworkers and colleagues in the fire service.

Seven people joined NFSA as a result of the Trade Show, and we welcome into our ranks the following new AHJ members: 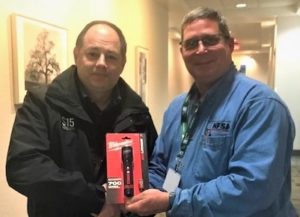 Upon signing up for the NFSA promotional membership for AHJ officials, each new member was entered into a drawing for a Milwaukee 700 lumen rechargeable flashlight. Daniel Burr won the drawing at the very end of the day and walked away “enlightened” by the educational forums and his new NFSA flashlight and membership!

We look forward to future events with the ICC and the AMBO. Each conference or trade show is an opportunity to educate, build partnerships, and foster the widespread acceptance of the fire sprinkler concept!