There were five people medically evaluated at the scene with three taken to the hospital, including the resident of the apartment where the fire started. All 60 residents were temporarily displaced due to the fire damage. The estimated cost of the fire damage is $20,000.

The Green Bay Fire Department regularly reports fire sprinkler saves within their community. They promote the importance of fire sprinklers to protect lives and property. Another great example of community risk reduction in action.

Thanks to Pace Corporation and Reliable Automatic Fire Sprinkler for their quick response to deliver needed system supplies and bring the system back into service with minimal displacement of the residents. Another example of the Buy NFSA initiative where suppliers work with contractors to provide excellent customer service. Pace Corporation thanks Reliable for its response on a weekend to get needed supplies. From Sales Representative Dave Fisher to Jacqui in the office to Jeff “Tugboat” Lukacs who picked up supplies from the Chicago warehouse and delivered to Pace. All of this was done one the weekend during late night or early morning. They went out of their way for Pace and their customer. 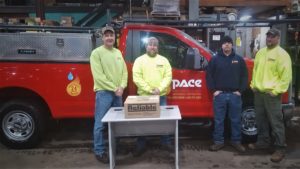