The blaze began shortly after 8:30 a.m. on the sixth floor of the Wilshire Boulevard high-rise. At least 300 firefighters responded to help battle the blaze and evacuate residents inside the building. An adult and a 3-month-old were taken to a hospital in critical condition, officials said, and six other people were treated for smoke inhalation.

After an intense hour-long fire fight made more challenging by strong 40-mph winds, firefighters were able to knock down the flames shortly before 10:00 a.m.

The Los Angeles Times reports that in 2013 a fire erupted on the 11th floor of the same apartment building. That fire displaced up to 150 residents and injured two people. It also prompted concerns about a lack of sprinkler systems in some buildings in Los Angeles. Unfortunately, seven years later, nothing had changed.

“At what point are we going to say enough is enough?” asked NFSA President Shane Ray. “Fires like this one highlight America’s fire problem, and it’s time we join together and adopt incentives for building owners. Too many firefighters and civilians are being put at risk everytime there is a fire in these high-rise buildings.” 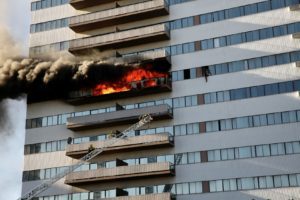 The National Fire Sprinkler Association (NFSA) applauds the Los Angeles Fire Department in its herculean effort to avoid loss of life in battling a truly difficult fire. We also find ourselves in the position of chronicling yet another fire in a high-rise residential building that was not equipped with a fire sprinkler system. In November of 2019, a high-rise fire in Minneapolis took the lives of five people and injured many more. In recent years, the Marco Polo fire in Honolulu and the Trump Tower Fire in New York City also claimed lives. None of these buildings were equipped with fire sprinklers. According to the National Fire Protection Association (NFPA), approximately 40 people die and over 500 are injured annually in high-rise fires. Fire sprinklers can change this and they are required in the national building & fire codes.

“While these are required in national model codes, many jurisdictions fail to adopt them legislatively or take the retrofit requirements for fire sprinklers out,” added President Ray. “Today’s modern fire environment is much more intense than ever and when that fire occurs at an elevated height it is even more dangerous for all involved, and it’s time for a legislative solution.”

As a result of the fatal fire in Minneapolis, U.S. Senators Amy Klobuchar (D-MN) and Tina Smith (D-MN) introduced legislation—the Public Housing Fire Safety Act—that would create a program to provide support to public housing authorities who wish to retrofit older high-rise apartment buildings with sprinkler systems. NFSA calls on all legislators to go a step further and ensure that all high-rises throughout our nation are equipped with fire sprinklers. HR 4685 –the High-Rise Fire Sprinkler Incentive Act – would provide tax incentives to building owners who retrofit high-rise buildings with fire sprinklers. These fires are as avoidable as they are devastating, and we have the solution to change that. There has never been a multiple loss of life in a building with a properly functioning fire sprinkler system.

About the National Fire Sprinkler Association (NFSA): NFSA was founded in 1905 and wants to create a more fire safe world, and works to heighten the awareness of the importance of fire sprinkler systems from homes to high-rise and all occupancies in between. The Association is an inclusive organization made up of dedicated and committed members of a progressive life-saving industry. This industry manufactures, designs, supplies, installs, inspects, and services the world’s most effective system in saving lives and property from uncontrolled structural fires.