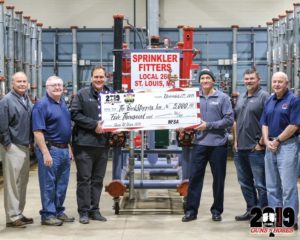 Once again, the St. Louis Metro Area Chapter and the St. Louis Fire Sprinkler Alliance teamed-up to donate to the Budweiser Gun ’N Hoses event. The event is the largest fundraiser for Backstoppers.

St. Louis BackStoppers began in 1959, recognizing the tremendous sacrifices made every day by police officers and firefighters. Their charity provides needed financial assistance and support to spouses and dependent children of the public servants who have lost their lives or suffered a catastrophic injury performing their duty.

By making mortgage and care payments, paying off debt and defraying the expenses of higher education, the BackStoppers are honoring their philosophy to care for the loved ones of those who have protected us.

The event has brought nearly 19,000 people together each year to watch firefighters go head-to-head against police officers in a boxing showdown. Annually, the event raises about $800,000 to aid about 80 families of public servants in the St. Louis Metro area.

“The Chapter and Alliance are proud to be a partner and help our public safety officials in their time of need,” said Richard Boyer of the St. Louis Fire Sprinkler Alliance.