The Minnesota State Fire Chiefs held their annual fall conference in Duluth Minnesota on October 16th through the 18th. NFSA has been a proud sponsor and supporter of the fall conference for years, and this year again we helped sponsor the Fire Prevention Poster Contest for elementary school students, Kindergarten through 5th grade. This year, NFSA staff members staffed an information booth for “vendor day” on October 17th. More than 500 registered delegates and their family members attended the conference and visited the booth.

So, it was a rewarding and enjoyable experience going to Duluth to network with delegates from around the state and to discuss sprinklers and the always-exciting fire service happenings with friends, colleagues, and former peers. A number of contacts were made with AHJ members, and the conference presented the opportunity to recruit new NFSA AHJ members. AHJ memberships are vital to NFSA mission success, because these members are the local champions of code and legislative adoption, fire inspections, and fire safety messaging. Fire Chiefs offer a very public and credible public image on scene at fire incidents, and can be great advocates for the fire sprinkler industry while in front of a large and attentive television audience. But they must be informed in order to provide the most benefit to our industry, and they must understand and use public messages that dispel sprinkler myths, help educate and encourage the public to consider sprinklers, and be realistic about the limited abilities of fire suppression actions alone in saving lives from buildings filled with modern contents and furnishings.

AHJ membership connects these important advocates and local officials to NFSA’s extensive training programs; the Expert of the Day program; the Spotlight on Fire Sprinklers and other news and information from NFSA leaders; regional and state chapter activities and meetings; and puts them in touch with industry experts who can explain the details of the fire sprinkler systems used in local jurisdictions. 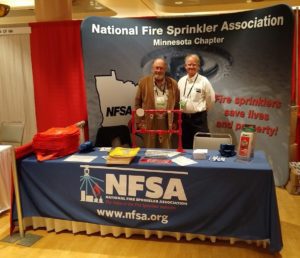 Booth activities were mainly focused on passing out copies of the wildly popular Winkler the Fire Sprinkler coloring books, reconnecting with old friends, and discussing NFSA activities and assistance available to fire chiefs. We also received several requests for side-by-side burn demonstrations during next year’s season. The final burn of this year will occur on October 30th. That’s getting pretty late in the fall, so when that burn is complete and the trailer is dried out, we will put it in winter storage and prepare for its glorious return in the spring of 2020. If you would like to get on our schedule for next year’s demonstration season, please contact one of the Minnesota staff members.