On August 11th, crews responded to an apartment fire at Lyons Gate Apartments in Redmond, Washington. The fire originated on the kitchen stove top and extended to the microwave and cabinets. The event was first called as a burn complaint by residents. Fifteen seconds later, the unit smoke alarm activated and smoke was seen coming from the second floor of a middle unit.

While enroute, responding units were notified by dispatch that there was a general waterflow to the building. After making access to the complex, the front door was forcibly opened and crews extended an 1 ¾” hose to the second floor kitchen. The sprinkler had activated and was controlling the fire. After fully extinguishing the fire, personnel moved the burning material to the exterior deck, checked for extension and began salvage and overhaul activities. No other units were adversely affected and no residents were displaced.

Thank you to longtime member Todd Short, Fire Marshal for the City of Redmond, Washington and Chair of the Washington State Residential Fire Sprinkler Coalition, and to Scott Turner, Assistant Fire Marshal in Redmond, for sending us this sprinkler save. 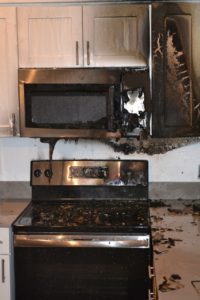