The Minnesota Chapter of NFSA presented the chapter “Lifesaver Award” to two Local 669 Sprinkler Fitters and three organizations at the National Night Out activities in Virginia, MN on August 6. The event was hosted by the Virginia Fire Department and the awards were presented by NFSA’s Minnesota-based staff. Award recipients included:

These reciptients were recognized for their significant role in retrofitting the iconic 41-unit Ivy Manor Apartment Complex in Virginia, MN. On the night of January 13, 2019, a single sprinkler activated to extinguish a fire started by an unattended candle. Excerpts from the award citiation included:

“An unattended candle started a fire on a wooden shelf and threatened the lives and property of the residents in the 41-unit apartment building. Responding fire and law enforcement personnel arrived to find that a single sprinkler head installed by Summit Companies Sprinkler Fitter Foreman Jeff Keppers and Apprentice Sprinkler Fitter Steve Homick had extinguished the fire. An uncontrolled fire in this building could have cost millions in damages and injured or killed a large number of residents and responders. Instead, there were no injuries, the fire displaced just 3 people, and damages were limited to $70,000.”

There is no doubt that without the efforts of each of these key players the January 13th fire would have been far more serious, and the damages and injuries could have been catastrophic. All of you deserve the title, “Lifesaver.” Therefore, is my pleasure to award you this Letter of Commendation for your efforts to protect lives and property through the use of fire sprinklers, and present to you the “Lifesaver Award” from the Minnesota Chapter of the National Fire Sprinkler Association.

The Chapter’s Lifesaver Award was developed to recognize property owners/managers, sprinkler contractors, and individual sprinkler fitters who were instrumental in designing and installing a sprinkler system that activated to save a life. The Lifesaver Award recognition program was designed by NFSA Local Coordinator, Joel Hewitt. The August 6 recognition program was the first time the award has been presented.
The award reciptients received a framed certificate and an accompanying Letter of Commendation. The Sprinkler Fitters received a decal to display on their hardhats proclaiming, “I saved a life with a sprinkler I installed,” and the title “Lifesaver Award.” 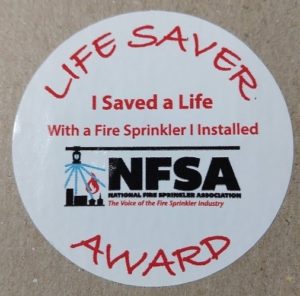 The award ceremony was attended by over 250 people; members of the Virginia Fire Department; Local 669 Business Agent for District 28, Chief Gene Stevens; representatives from AEOA; and members of the Summit Fire Protection staff. The awards were preceeded by a side by side live burn demonstration where audience members got to see firsthand the activation of a sprinkler system and the deadly results of an uncontrolled fire. The award reciptents and the live burn demonstration were very well received by the enthusiastic crowd!