I had the opportunity today to witness a test of a deluge system at the Maryland State House. The imposing building sits atop the rise from the Annapolis Harbor, an arm of the Chesapeake Bay.

Construction began in 1772 and was completed in 1797, the delays caused by the American Revolutionary War against England. From November 26, 1783 and August 13, 1784, Annapolis served as the Capital of the United States and the Maryland State House is from where our country was governed. The Treaty of Paris, which ended the Revolutionary War, was signed in the Old Senate Chamber and it was in that chamber that George Washington resigned as commander-in-chief of the Continental Army. Such history cannot be lost.

The Maryland State House is the oldest continually-operating home to a state legislative body in the United States. Most of the building is protected with a standard wet-pipe sprinkler system, with the exception of the Old Senate Chamber; it is protected with a misting system. Our own Vince Powers commissioned that system quite a number of years ago.

As mentioned, the State House sits on top of the rise, overlooking Annapolis. On top sits a wooden rotunda. Last evening, the Annapolis area was hit with a lightning storm extraordinaire. Bolt lightning could be seen all around the harbor and bay area. The Maryland Department of General Service feared a lightning strike could light-off the building so, in the early 1990s, they installed a deluge system around the outside of the rotunda. There appears to be four rows of open sprinklers surrounding the rotunda. 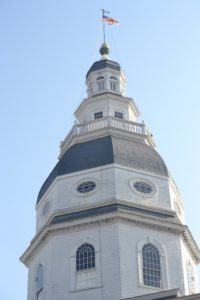 The system is activated by a “Pyrowire” system and is designed to simply soak the combustible construction. 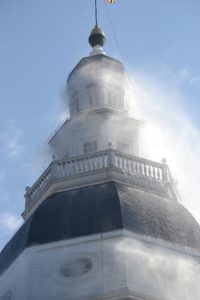 Water is supplied by a 1,000 gpm pump in the basement of the building, It was quite a sight when it was activated.