Thanks to the support of the Fire Sprinkler Advisory Board of Puget Sound, I was able to attend the 2019 NFPA Conference in San Antonio. In addition to representing NFSA members at the Technical Meeting and taking advantage of numerous networking opportunities, I attended several great educational sessions.

After two days of absorbing seriously technical information, I decided to attend a breakout session on “Fire-Related Human Behavior,” presented by NFPA’s Rita Fahy.  Ms. Fahy has studied fire fighter and human behavior in fire situations from a statistical analysis and computer modeling background, but what she had to share was purely human.

Ms. Fahy discussed the expected factors affecting civilian reactions to fires: age, gender, disabilities, training, experience, familiarity with the facility, whether alone or tending to others, and whether sober or impaired. 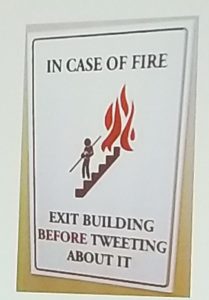 However, the presentation took a deeper dive into several nuanced factors. As with many reactions to stimuli, culture looms large. One example: American school children grow up with monthly fire drills and have practiced following an evacuation plan while people from other countries may not have that routine exposure. Cultures that value politeness and queuing up may cause internal conflicts during emergencies—we saw a brief security camera footage from Britain in which a store patron stands in line and politely waits his turn before telling the clerk about a growing fire in the front of the store.

Ms. Fahy discussed a phenomenon called “learned irrelevance” which explained how people will tend to avoid exits that they have been trained not to use–such as an alarmed exit in a nursing home—even in true emergencies. And perhaps more relevant today—how engaged is a person in activities when the smoke starts to waft in or the alarm bells ring?  Not surprisingly, those engaged in engaging activities have a hard time realizing impending danger.

Building design had an outsize influence on human behavior. Where people expect to find exits, the specific sound of the alarm, the conspicuousness of exits and accompanying signage, and even perceived ease of evacuation influence how effectively and quickly people respond to emergencies.

It was reassuring to know that “panic” in emergencies is a rare reaction—the data shows that usually people help each other. That being said, my takeaway is this:  human behavior is variable. Why not help eliminate the source of many emergencies—fire—by making sure all occupancies have a fully-functioning fire sprinkler system?