What do you get when you mix a Memorial Day weekend with 80-degree weather in Madison, Wisconsin, along with the World’s Largest Bratfest? A great opportunity to show off the NFSA Wisconsin’s Chapter’s newest mobile side-by-side trailer. Bratfest was established in 1983 as a festival that donates its profits to Madison area charities. This event donates to over 100 charities raising almost $4 million over the past 35 years. The event is free to the public and features music, food, amusement rides, family activities and exhibits for the estimated 100,000+ that attend the annual event.

Contractor Members of NFSA assisted with sponsorship of this event. H.J. Pertzborn was one of the major sponsors for Bratfest and JF Ahern sponsored the exhibit space for the event. 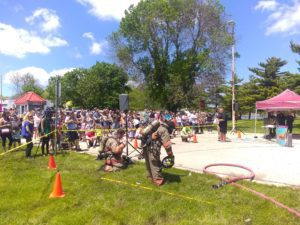