Sprinkler Save at McDonald’s in Coxsackie, New York 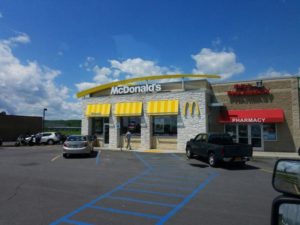 Thank you to NFSA member SRI Sprinkler’s Director of ITM Jason E. Daus for sending us this sprinkler save!

From Jason: “I know they don’t mention how the fire was put out, but the Ansul System went off as well as a 200-degree Quick Response Pendent sprinkler head. I walked the site today. Crisis averted to smoke and water damage only.”

From the News Article:
Coxsackie Fire Department Chief Shawn Burdick said a fire was reported in a local McDonald’s on March 10th about 5:50 a.m.
The Chief reported that a gas leak in the kitchen ignited a fire that extended into the ceiling. He said the blaze was put out within minutes and that there were no injuries.