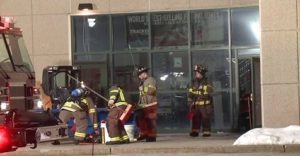 A fire in the game room at Cabela’s in Richfield, Wisconsin appeared to be an electrical malfunction in an arcade game.

Richfield Volunteer Fire Company Deputy Chief Tony Burgard said the fire was extinguished by the building’s fire sprinkler system. Fire damage was limited to the arcade game. Cabela’s was closed on Friday to clean up smoke and water damage from the fire, but opened for the weekend

The Richfield Fire Company was originally paged to Cabela’s for a fire alarm activation at 11:19 p.m. Thursday. The store was unoccupied at the time of the fire and there were no injuries from the fire.

“The first arriving crews found the alarm system going off and when they were able to get into the building the fire sprinkler pump was running and they could see smoke in the building. They then found a fire that had been extinguished in the second-floor arcade game area,” Burgard said. “One of the games appeared to have been on fire and there was a sprinkler head in that room that completely extinguished the fire. “So, one sprinkler head saved the entire building,” Burgard said. “That sprinkler saved possibly millions of dollars in damage. It could have ended up much, much worse.”