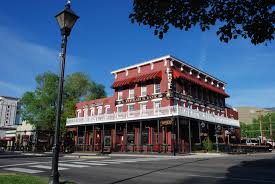 The first arriving units observed smoke from the second floor of the hotel. Firefighters discovered the fire had been extinguished by one fire sprinkler. Fire Department personnel were quick to note that had the building not had fire sprinklers the fire would have been much more serious.

A total of 17 firefighters responded to the incident. All went home safe.

This is a shining example of how fire sprinklers can preserve local history!