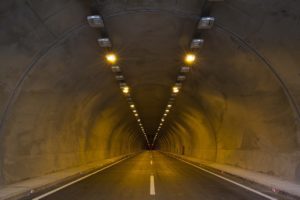 On Monday, January 28th, a car caught fire in the middle of the Johnson Tunnel, on I-70 about 60 miles west of Denver. The Eisenhower/Johnson Tunnel complex is almost two miles long and is critical for traffic moving across the Continental Divide. Any significant damage to either tunnel from this or any fire could have serious, long lasting economic repercussions for the State, particularly for the ski industry. The multi-million dollar fire suppression system was installed by NFSA member Western States Fire Protection to help combat this worst case scenario. It had never been tested in a real life situation- until now.

Although the tunnels were completed about 40 years ago, they were only recently retrofitted with sprinklers. At over 11,000 feet above sea level, the tunnels are subject to freezing temperatures at all times of the year. To prevent the sprinkler system from freezing, member contractor Western States Fire Protection designed and installed an innovative recirculating, deluge system. When the fire started, the system functioned exactly as designed. According to the Colorado Department of Transportation (CDOT), the sprinklers extinguished the fully involved vehicle before responders arrived. Personnel credited the sprinkler system with preventing extensive damage to the tunnel and saving the people in the car. The tunnel sustained minimal damage and was again operational within 1-1/2 hours.