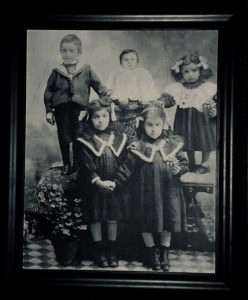 Some of us come into this industry through the back door; a good job offer at the right time, an opportunity that meets our qualifications, a 10-minute commute to work that can’t be passed up, and so on. Others have “a fire story,” something that prompted them to get into the field of fire protection, whether it be as a contractor, manufacturer, designer, engineer or fire safety advocate.

I am in the unique position of being part of both groups. When I interviewed for my job at NFSA 12 years ago, the company I was working for was going out of business. Being the sole provider for my two young sons at the time, I desperately needed to avoid any downtime of employment. A job opportunity in the Communications Department at NFSA appeared at just the right time.

When it was time for my final interview, I sat up the night before wondering what I could say that would make me unique. What would show the passion that I could bring to the job? That’s when I remembered my fire story, a story that was handed down from my great-grandparents through the generations. A story none of us every forgot.

My great-grandparents immigrated from Italy to the United States in 1896. The arduous trip in the steerage compartment of a ship was made worthwhile with their first glimpse of the Statue of Liberty as they arrived at Ellis Island. Like many other Italian immigrants of the time, they settled in the part of New York City known as Harlem, East Harlem, to be exact, which was home to a thriving Italian community in the late 1890s. They secured an apartment in a four-story walk-up, called a tenement back then. Of course, there were no fire sprinklers to be found.

My great-grandfather found work as a tailor, while my great-grandmother was busy with starting a family. My great aunt, Teresina Graziella Saggese was born first, in June of 1897. Six children would follow, with some miscarriages in between, five would survive until adulthood.

One of those children, my great-uncle Georgie (always the rebel) decided one day to take a box of wooden matches that my great-grandmother used to light the gas stove. He went under a bed in one of the two bedrooms and started lighting them up. Eventually, as would be the case, he started a fire. Not wanting to tell my great-grandmother what he did to avoid the punishment that would soon follow, he left the bedroom and never said a word.

The apartment they lived in was a railroad flat. The rooms all went off a long corridor, with the bedrooms at the far end. By the time my grandmother smelled smoke, it was already too late. The bedroom was engulfed in flames and she had to get the six kids out. She was 8 months pregnant at the time. By the time she gathered the children and pried my Uncle Georgie out of a closet he was hiding in, the apartment was thick with smoke and fire. Somehow, she managed to get them all out safely, alert the other tenants and thankfully that day, everyone survived. My grandmother suffered burns to her face and eyes that caused her to go blind. The child that she was carrying was delivered stillborn a month later. The family stayed with neighbors until able to find another apartment. The year was 1911.

At the time, my great-aunt Teresina was 14 years-old. The family was so proud of her. The year before, at age 13, she had secured a job at the Triangle Shirtwaist Factory. She wore roller skates and would skate up and down the aisles of workers delivering supplies such as pins and needles. Because of my great-grandmother’s blindness, my great-aunt was forced to quit her job to take care of the young family. My great-grandmother was never the same after the fire. She was depressed over the stillborn she had delivered and traumatized by the fire itself.

My great-aunt quit her job at the factory in late January of 1911. On March 25th of that year, the Triangle Shirtwaist Factory burned to the ground, taking with it 146 souls ─ 123 women and 23 men. The youngest were just 14 years-old, the same age as my great-aunt. She lost a lot of friends in that fire, and it remained hard for her to talk about for years to come.

So, while the tenement fire caused the downfall of my great-grandmother, it just may have saved Teresina’s life. She lived to the ripe old age of 92, and was sharp as a tack right until the end. She told this story to me and my sisters when we were little kids, and we never forgot.

This is my fire story. This is what makes me so grateful to have found a job at an association that is dedicated to saving lives, working toward the widespread acceptance of fire sprinklers. So much would have been different in the lives of my ancestors had fire sprinklers been present where they lived and worked. My great-aunt asked us all to never forget. I never will.

Do you have a fire story? What brought you to the fire protection industry? We’d love to know! The September/October issue of NFSM is our “Member Takeover” issue. It’s your chance to fill the pages of the magazine with your stories. Email genadio@nfsa.org with your submission as soon as possible. If selected, you will see your story published in the issue. We’ll send you extra copies for family and friends.