Sprinkler Save at St. Louis Warehouse 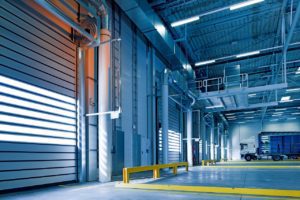 Thank you to Steven Schepker of Century Fire Sprinklers, Inc. in Fenton, Missouri for sending in this sprinkler save!

At approximately 5:30 a.m. on Monday, October 29th, a fire broke out in the storage area of a warehouse in St. Louis, Missouri. The fire started in a rack, and was quickly spotted by employees. It is suspected that combustible or flammable liquids may have been involved, as four fire extinguishers were emptied with little effect on the flames.

The building is long and narrow and the heat went to the peak and set off the dry sprinkler system, fusing multiple heads. The heat raced along the peak of the roof and out through passive vents like a chimney.

The fire department responded and used hoses to extinguish what was left of the fire and shut down the air compressor. After the blaze was extinguished, approximately 40 sprinklers were changed out by Century Fire. Lots of smoke and some electrical outage, but everyone was at work that morning and functioning somewhat close to normal, thanks to the quick response of the fire department and the sprinkler system!